Looking for porcine circovirus 3 in domestic pigs and wild boars. 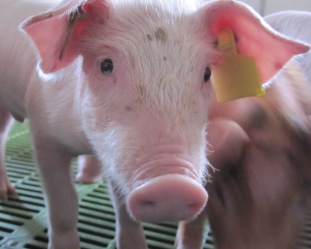 Porcine Circovirus 3 (PCV-3) is a recently discovered virus belonging to the family Circoviridae. It represents the third porcine species of genus Circovirus, together with PCV-1, considered non-pathogenic, and PCV-2, one of the most economically relevant viruses for the pork industry.

PCV-3, able to infect domestic pigs and wild boar, was first discovered in 2016 in the USA through metagenomics studies, specifically on a farm whose animals presented reproductive failure, increased in the sow mortality and decrease in conception rate. Another study at the same year, also in the USA, revealed the presence of the virus in animals affected by cardiac and multisystem inflammation. Since then, the virus has been described circulating in different countries in animals with different clinical / pathological presentations and in healthy pigs.

In order to gain insights into the molecular epidemiology of PCV-3, a PhD thesis was carried out with three different studies on samples of domestic pigs and wild boar from Spain.

In the first study, the presence of PCV-3 was evaluated retrospectively in the Spanish pig population between 1996 and 2017 using sera from animals of different production phases and clinical/pathological conditions. Compiled data confirmed that the virus has been circulating in the Spanish pig population since the year 1996. The overall frequency of PCR positive samples for PCV-3 in the study period was 11.47% (75 out of 654). Phylogenetic analysis of PCV-3 obtained sequences showed a high identity with the already known PCV-3 sequences, with low variations among years. Although the available information was limited, PCV-3 did not appear to be linked to any specific pathological condition or pig age-group.

In the second study, the dynamics of PCV-3 infection in sera from 152 pigs from 4 conventional farms without any type of clinical signs were analyzed. The animals were monitored longitudinally five or six times from 2 to 4 weeks of age until the end of the fattening period. PCV-3 genome was found in pigs from all tested ages and farms; in few animals the genome was detected in several samplings, during a period ranging from 4 to 23 weeks, depending on the animal. Phylogenetic analysis showed a high similarity between the obtained sequences and available PCV-3 genomes from different countries. Results confirmed that PCV-3 circulated in all studied farms from Spain, suggesting that infection is probably widespread in the country. Most of the pigs got infected during their life, although PCV-3 did not appear to circulate mostly at any specific age.

In the last study of this PhD thesis, carried out on samples of wild boars, the retrospective frequency of PCV-3 infection between 2004 and 2018, as well as in a population of captured and recaptured boar, were analyzed. Obtained results confirmed the susceptibility of this species to PCV-3 infection, showing high frequency of PCV-3 detection (221 of 518, 42.66%) and demonstrating circulation at least since 2004. Compiled data suggests that PCV-3 is apparently able to cause persistent infection, since 5 out of 10 PCV-3 PCR positive captured/recaptured boars showed positivity in samplings separated for more than 5 months. The frequency of detection of PCV-3 genome in wild boar tissues and feces was examined for the first time. The highest percentage of PCR positivity was found in submandibular lymph node, tonsil, lung, liver, spleen and kidney. The amount of DNA in all tested PCV-3 PCR positive samples was moderate to low. All partial and complete PCV-3 sequences obtained from wild boar displayed high nucleotide similarity (>98%).