Viral comments (24): Norovirus and Andorra; nothing to declare? 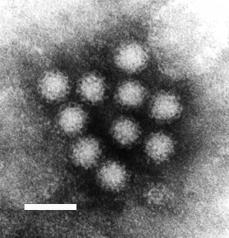 The last two weeks news about the outbreak of norovirus on bottled water in Catalonia have flooded the headlines After the initial tumult, here is a briefing of the facts, with a few conclusions.

First, let us be careful when we express ourselves, particularly when it is in printed press. Clearly, if a norovirus contamination is detected, in the end will be unfailingly due to human faecal contamination (especially if we talk about genogroups I and II; there are other genotypes of norovirus affecting cattle and others that have been isolated in pigs and mice, there are up to 5 genogroups with multiple genotypes of norovirus). Some media showed their surprise. How else do we think that faecal-oral transmission of viruses occur? Because, in some way, faecal material reaches the water supply or when not entirely clean hands come in contact with food, the kinds of foodstuffs which are eaten raw or poorly cooked. And we’re not just talking about norovirus; rotavirus and astrovirus are also causative agents of gastroenteritis; hepatitis viruses cause hepatitis A and E; polio virus, fortunately almost eradicated, also shared this route of transmission… Also, it is important avoid direct translation of molecular detection of viral genomes as equivalent to detecting infectious particles. Since we are measuring different things, our outputs will be different. Accuracy is important:  the polymerase chain reaction, PCR, makes copies of the molecule (genome segment) we are trying to find. But for this genome to be infectious it needs (often) to be coated with a protein capsid containing the signals that will allow for the virus entry into the host cell. This is the reason why these (PCR) techniques allow us to initially talk of copies but not of infectious virions; the correlation is not correct, it is not simply equivalent.

Contamination of an aquifer is pretty bad news because when a virus enters an aquifer it may persist there for a long time. Why? Aquifers, groundwater, are usually considered microbiologically “safe” because there is a barrier, which is the soil itself. The soil prevents viruses and bacteria from the surface, where the stools/excretions are (if we are considering faecal-oral transmission viruses, of course). This barrier, however, becomes a shield if the pathogen, using cracks, or simply traveling slowly and steadily downwards, passively, with the filtered water, reaches the aquifer. There it finds an environment with low microbial activity (therefore, low competition or few enemies) and a number of factors (relatively low and constant temperatures, absence of ultraviolet radiation) that contribute to a high persistence of the order of weeks, months or years. It’s a long story (and not the subject of this post) but this trip into the aquifer of the virus and/or bacteria will be affected by many variables. Including the type of soil (sandy, loamy, mixed, rocky), the level of water saturation, pH, conductivity of the percolating water, the presence and amount of soluble organic matter… Just to name a few.

Indeed, our very small noroviruses, are quite resistant to planned inactivation steps, those executed by the human’s hands. They are perfectly capable of withstanding acidic or basic pH (about pH 2 and pH 12, respectively for 30 minutes at 37 ° C) and require a generous amount of bleach (about 300 ppm or more depending on the presence of organic matter) meanwhile to “kill” other common faecal bacteria it may be enough with a dose of 70 ppm. This resilience is what explains its involvement in gastroenteritis outbreaks in collective establishments such as restaurants, school or college canteens, cruise ships, hospitals, etc.

Published contamination data are quite variable; remarkably different concentrations of norovirus have been announced. Thus, the Andorran government has established levels of between 20 and 130 particles of contamination per five litres of water. These figures stand well below what had communicated the Generalitat, a few thousand copies per litre of genogroup I and genogroup II noroviruses, at the press conference last Monday, April the 25th. The case is that, if I need to choose between the results of two samples tested by nucleic acid amplification techniques, one with more viruses (5,000 copies per litre of norovirus genogroup I and about 10,000 copies of genogroup II) than the other, I will usually believe the first one (the most highly charged)…provided that the controls in both cases are correct. Indeed, a false negative, or lower signal intensity is always moooooore likely to occur with amplification techniques that an artificially increased of nucleic acids signal. Incorrect concentration of the sample during its “preparation”, mistakes in the removal/separation of inhibitors may yield low signals that translate into a low number of copies … such as in the results reported by the Andorran government. Except if it was a case of “conversion factors” type mistake (remember the case of miles versus kilometres mistake from the Mars Climate NASA Orbiter, in 1999!), the data provided in the press conference on Monday 25 deserves more credibility.

…absence of bacteria does not imply absence of virus.

Alright, some might say, if they have detected noroviruses is because effective techniques to do so are available. But why everything is always done too late? Lack of money? Inadequate planning? Why do we just use bacterial standards? Some might claim… The bottomline is that they are irrefutably right. But these claims crash with the feasibility or cost-benefit ratio thereof. Microbiological indicators of water quality are, according to European standards, bacteriological. Detection of faecal bacteria may involve the possibility, but not the certainty, of the presence of faecal viruses. A water with a “positive” result to faecal bacteria detection in a sample of a specific volume, for example 100 ml, should be withdrawn from consumption. But unfortunately, it is known long time ago that viruses may be present in water that no longer contains these viable faecal bacteria. Thus, the occurence of bacteria announces the possible presence of faecal-borne virus (norovirus, astrovirus; hepatitis A virus and, in the past, poliovirus, among others). But absence of bacteria does not imply absence of virus. Viruses can be very persistent and remain infectious for weeks or months in once they have reached water. Why not to test for viruses then? Due to its cost. And also because molecular techniques prove the presence of viral genome but cannot guarantee that this virus is still infectious. To demonstrate the presence of viable viruses, one must wait days, even weeks of culture in appropriate cell lines (that is if the particular virus can be cultured, not all of them can and, as far as I remember, noroviruses are not cultivable). Therefore, from this point of view, we must assume that there is a breach here, through which an outbreak will occasionally percolate. 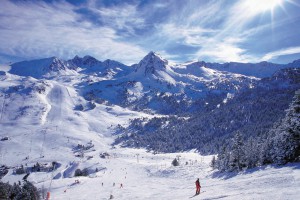 An epidemiological investigation is like a murder investigation, in which evidences are collected. Often merely circumstantial evidences and, occasionally, one finds conclusive evidence to establish “who” the murderer is. Other times, however, like in real life, the smoking gun cannot be found. In this case, the story began with the detection of the virus in bottled water. The investigation was expanded and the bottling line was then blamed, even an improper sanitization of the bottles, which are re-used, was considered. And, finally, the virus was detected in the aquifer itself. Therefore, the original source (i.e. Font d’Arinsal) is the “guilty”. However, again, someone contaminated this source unintentionally or not. This is going to be hard to establish because contamination of an aquifer can happen hundreds of meters to kilometres away from the water collecting point.  So we shall not predict to be solving this plot any time soon, sampling and testing all the involved elements might take a long time, if it is ever to be solved.

Carrying on with the comparison, let’s just hope that someone will devote himself to this case with the mind of one Sherlock Holmes, rather than that of Inspector Clouseau.