The text that follows contains my opening speech as President of the Spanish Association of Biosafety at the welcome session of the 3rd congress of the association, AEBioS held in Bilbao the past October 17th and 18th. That same day, several congress’ attendees told me they were pleased with the talk because it was an original and well engaged approach. Here’s a translated (from spanish) transcription of the speech:

A lame duck is standing in front of you (referring to the US president in his second term when inching the exit door, and in two days I will do the same) but this lame duck wants to share some thoughts with you before starting this 3rd AEBioS Congress.

Biosafety broadly aims to ensure an adequate, not absolute, level of protection in the transfer, handling and use of biological material, this latter genetically modified or not. Since it may affect biodiversity and therefore animal or plant health or pose risks to human health. Biosafety is risk management, prevention or mitigation, since these risks affect human life, and what enables human life, such as the environment and food. Therefore biosafety is implicated in many aspects of animal health and plant health.

The combination of risk and technology is evident from the beginning of the industrial revolution … every application of technology that makes us go faster, higher, farther, deeper implies that society accepts the assumption of a residual risk to be known or quantified “a priori”. That this risk is socially acceptable will depend on the perception that society has of it … or on how society has been manipulated regarding this risk. And here we, the congress’ attendants and many others who have not come, have a great deal to say on the matter because the probability of technical risk often has no direct equivalence with the perceived risk or, if you like, the risk accepted by society. The emergence of new pathogens, or the reemergence of others almost forgotten, the escape of these from facilities handling them, the epidemiological alerts, pose some risk but the amount of it is not determined only by technicians, doctors, scientists but also by other social actors (media, politicians, activists, NGOs …). Bear that in mind.

Hence, we fall very often, and perhaps too deep, inside the “precautionary principle”. The grounds on which the technological risk fight with this kind of “social risk”. For decades, the logic of progress, or certain unconsciousness, generated a certain tolerance towards risk ignorance. This today, at least socially, is not admissible…not so easily, at least. The trend now is the evaluation of known risks, and therefore subject to assessment and weighting. But do we really know all the risks; are we able to fully quantify them? The “when in doubt, do not do it” way is imposed, perhaps too often, when there is no scientific certainty on one side … or the other. Bringing scientific uncertainty to the public sphere generates a reaction of social indeterminacy, social blockade. Proof of this is the controversy of the GoF (Gain of Function) experiments and the applied moratorium, I would have liked to bring this issue to this Congress … but it’s still early. 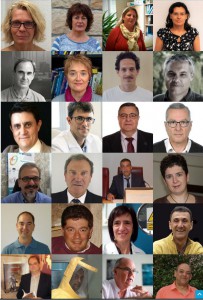 It is science itself, the scientists and technicians themselves, who recognize their own limits. The wise are aware of their ignorance and of the length of their knowledge. The precautionary principle drinks of this scientific knowledge of its limitations, about their own ignorance. If the precautionary principle expresses faith in science, in scientific knowledge of what is not yet known and accepts with conviction what will be known if further research is performed, it can be a good tool. But it will be otherwise if it is used to block or delay in time.

And it is our responsibility to stop being introverted, self-referring individuals … we will listen to communications from attendees, some familiar, others that I will meet today, in which as members of the scientific-technical community will assess or manage the biotech risk “inward” looking to ourselves. That’s fine but as much or more important than this is to yield a social discourse. One that includes elements or technical realities, responding to concerns of society and that should be done looking outwards, to the others, collaborating, giving expert opinion in the press, radio, television or taking advantage a great tool such as the Internet and the social networks. What we don’t do ourselves … someone else will do it instead of us.

In the not too distant past,  man was the centre of all: anthropocentrism. Currently, although we reserve an “important” role to ourselves, we see, we know that we are part of a bigger mesh, we are a node, and our lives depend on other life forms. Some time ago I read that if ten thousand years ago domestic animals and those who domesticated them accounted for just 1% of terrestrial vertebrate biomass, today we account for 98%. As we can understand, this population explosion has happened at the expense of other living organisms on the planet, thanks to our technological domain … but also we are more aware, as we are more knowledgeable, about the difficult balance between human beings and our environment. The management of our risk is also related to this.

To this, we must add a state of social opinion of some prevention, even distrust, against scientific and technical development, especially in the various branches of life sciences. An argument that feeds this state of permanent suspicion is self-refuting scientific data. In the sense that science today is usually unable to provide an unambiguous answer in some fields. Frequently, in specific fields, opposed studies exist, some sanctioning the existence of high risks meanwhile others label such risks as minimal.
No one disputes the risk inherent to all human activities, such as driving, but some have been socially accepted before. However, with time, we have lately become more demanding and nowadays risk aversion seems absolute. The guarantee of zero risk is intended, but not zero Celsius, a zero Kelvin is searched istead!!! And if that is not possible, abandon that experiment or that technology. We have moved from accepting the absence of evidence of harmful effects to claim vehemently the demonstration of the absence of these effects. We settled, in the past, with the absence of evidence and now people would kill for evidence of absence. Here again shows up the misunderstood precautionary principle.

No one denies the risk. And this is what our congress is about (for details visit its  specific website). About risk assessment in research and university settings (session 1). About how to organize the box (the building) from which we will manage that risk and the staff who manages it (session 2). About how technology solves the risk posed by controlled breaks in biocontainment (Session 3, in principle, a kind of case study). About how the approach to biosafety compulsorily changes when the material to be handled is different (Session 4) and about the gap between social perception and technical management of biosafety, especially in critical situations and how to communicate both compartments (Session 5).  And, finally, and maybe, just maybe, the most important, how to train, how to be trained or educated, but also let me add, how to shape new minds’ opinions regarding biosafety and biocontainment (session 6). Wow!! It’s that all!?!

So we will leave it here. Alea jacta est said someone once before. I declare opened, never thought I’d say this, seriously, the 3rd sessions of the Spanish Congress of Biosafety and Biocontainment, our AEBioS association. Thank you very much to all. Eskerrik asko.