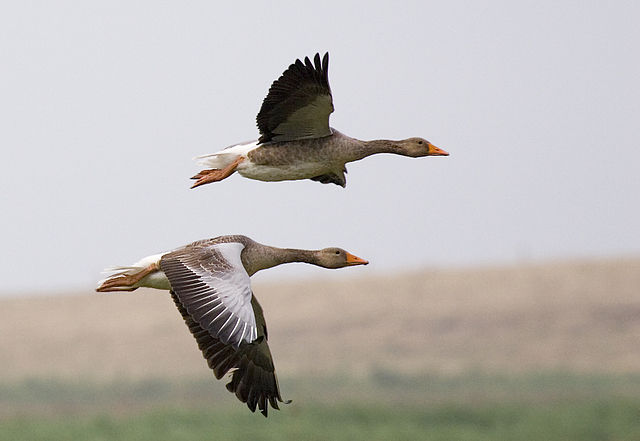 In the last post, a few days ago, we commented that H5N8 avian flu had reached the other side of the Pyrenees and that soon it would jump towards the Peninsula. A few days ago the detection of H5N8 strain was reported in two common geese (Anser anser) found dead in the lagoon of La Nava de Fuentes, in Palencia (Castilla y León). This detection was possible thanks to what we call passive epidemiological surveillance.

Passive surveillance programs for avian influenza in wild birds are based on the detection and analysis of any abnormal increases in wild bird mortality that may be associated with  avian influenza occurrence. In short, dead wild birds that have not been killed by a predator. In these cases, the samples of wild bird carcasses will be collected and sent to the reference laboratories for analysis. Our research center, IRTA-CReSA is responsible for surveillance in Catalonia, by delegation of the Department of Agricultura, Ramaderia, Pesca i Alimentació (DARP) of the Generalitat de Catalunya. The collection of the birds must be done by specialized personnel always adopting minimum safety precautions (gloves, tweezers, and filter mask if available). A key point of passive surveillance is to provide the population with guidelines for action if they find dead birds. As they are dead birds, we are facing an acute, fatal process, and the samples that are usually analyzed are tracheal and cloacal swabs (which are the usual routes of viral excretion). Detection of the viral genomes implies positivity, and recent infection. 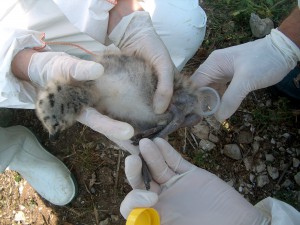 In contrast to passive surveillance programs are active surveillance programs; in these cases a sampling is established in wild birds at different times of the year, in order to try to better understand its viral epidemiology. Sampling intensifies during breeding, migratory and wintering seasons. This sampling can be done by catching them or sampling dead birds by hunters. The number of birds, their distribution during the year and the species involved, must be carefully calculated to maximize detection capacity. In these cases the samples to be taken are the same; Tracheal and cloacal swabs, but serum (live birds) can also be extracted to control prior exposure to the avian influenza virus, and to which particular strain.

The focus of the two programs is on the H5 or H7 variants of avian influenza viruses which are where the highly pathogenic variants found on birds … and in some strains, on humans.

All the measures explained above, function as a radar, which informs us of the possible circulation of the virus in the wild populations and of a potential affectation to poultry populations, our farm birds. Therefore, it is a preventive measure, which is complemented by equivalent surveillance plans in poultry farms. In these cases, much more controllable and quantifiable. Owners or personnel dealing with animals should report urgently if one or more of the following signs (all indirect measures of an infectious process) are detected:

But surveillance plans are not the only solution to prevent bird flu; there are three types of measures to be used together.

First, biosecurity and surveillance measures, including:

Secondly, if an outbreak is detected, slaughter the infected birds. There is currently no cure for highly pathogenic avian influenza and a feathered version of “a dead dog bites not” is adopted. In this situation, to prevent the spread of the virus, the following actions would occur;

Thirdly, to prevent further spread of infections, a vaccination program can be implemented if the vaccine is quantitatively available taking into account the following:

The presence of highly pathogenic Avian Influenza (HPAI) viruses in Spain is not very common.

In wildlife, the only case of HPAI H5N1 detected in Spain was in July 2006, isolated from a wild bird found dead, a great crested grebe (Podiceps cristatus). 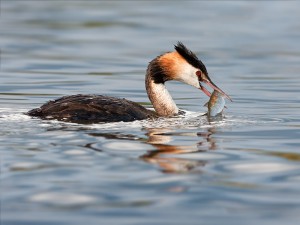 As for poultry, HPAI H7N7 was spotted in a hen farm in Guadalajara (Castilla-La Mancha), at the end of 2009. In 2013, an outbreak of H7 avian influenza (which contains highly pathogenic strains for birds) was also detected. In this case, however, it was a low pathogenic avian virus (H7N1) strain in a breeding hen farm in Lleida. In both outbreaks, after confirmation, a protection zone and a surveillance zone were established to prevent the spread of the disease, as well as the slaughter of all birds present on the farm (more than 300,000 hens in Guadalajara, 13,000 in Segrià), the destruction of all materials present on the farm that could carry the virus (e.g. all eggs and bird feed) and subsequent cleaning and disinfection. No secondary spread were detected in either case.

However, all avian flu detections are important, both HPAI and LPAI strains … for example, during 1983 and 1984 there was an outbreak in the United States caused by the H5N2 subtype that started with low mortality rates, to evolve until the achievement of mortality rates in birds of 90% , six months later. In the end, more than 17 million birds had to be culled. Or an outbreak of LPAI H5N2 bird flu that began in Mexico in 1992 and ended up being highly deadly and could not be controlled until 1995.

And it is very difficult to control birds, especially the wild ones, and even more to clean and sanitize a farm because influenza viruses can survive, remain potentially infectious on surfaces, tools and materials, fomites. Not too long, but they can do it.

Acknowledgments: the author thanks Dra. Natàlia Majó (IRTA-CReSA, UAB) for her revision of this post.

One Response to Viral comments (32): H5N8 is already here … can we prevent the next one?