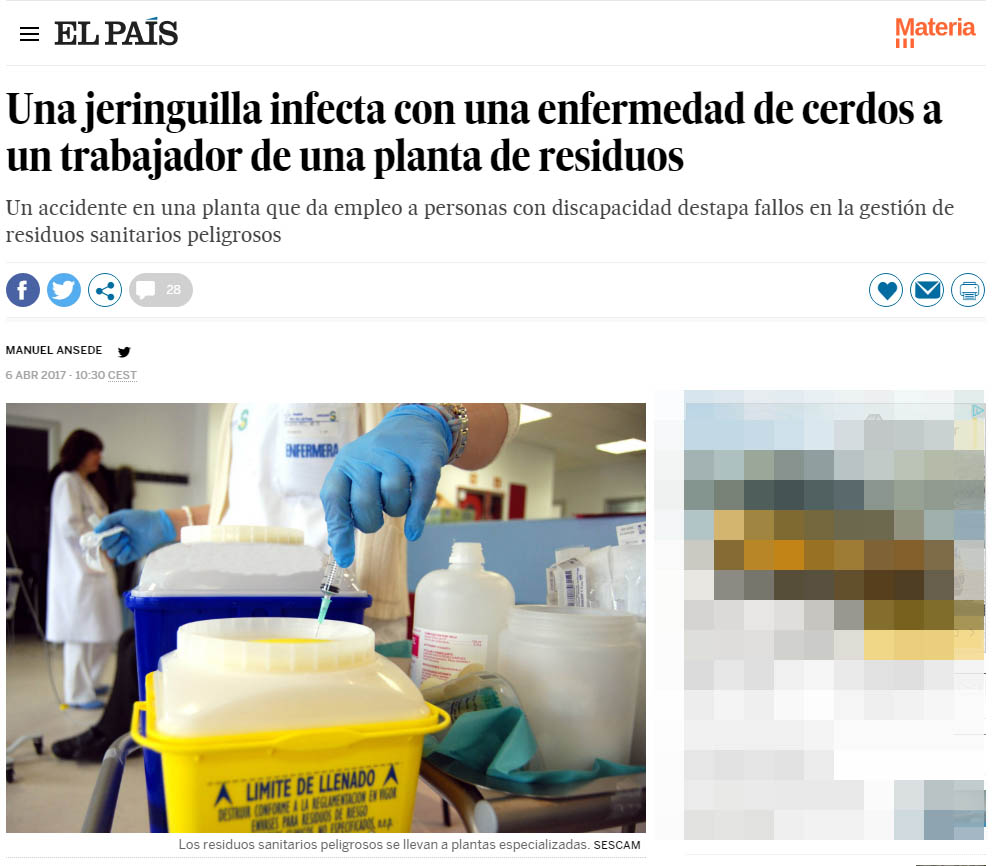 Following a story recently published  in El País about an occupational infection perhaps it is worth talking about the waste management process in a research centres like ours, and some derivatives.

We work with dangerous (risk group 2) or very dangerous (risk group 3) pathogens. Prior to the start of any experimental work a segregation of waste products is performed since all material that should not be in contact with pathogens or potentially contaminated environments (cardboard boxes and plastic wrappers of gloves, kits, pipettes, etc.) are removed before and processed as domestic or banal waste. After completion of the work, all material potentially in contact with pathogens (plastic pipettes, culture media, swabs, handles, etc.), which may already have been partially disinfected, is introduced into approved plastic containers (usually of 60 litres capacity) that once filled are completely and correctly closed to be collected by an approved company and sent to a treatment centre, as mentioned in the article, where its contents are inactivated by autoclaving. Nothing that has been in contact with infectious biological material goes to regular municipal waste treatment plants.

Going back to the El País article, what does seem a contradiction is what the veterinarian mentions … “Legislation should be more demanding, because now it allows to put biological material without autoclaving [not sterilized] in the containers.” Ok, it would be ideal to sterilize by autoclave at source, as he says, but then what sense would it have to send it to treatment plants … to treat it at the same way, to sterilize it again? And pay attention, this would imply hundreds of sterilization plants distributed throughout the territory with the increase of energy consumption, devices that would require maintenance and personnel that this entails. For me this legislation is correct, as long as the containers are properly and perfectly closed… and we come back here to our responsibility as waste generators. Because these containers are built to be resistant to puncture and hits, we can not blame them.

This does not impede particular approaches, such as ours. In our case, in the case of residues that have been in contact with pathogens of risk group 3, which are zoonotic viruses or bacteria, they are submitted to sterilization by autoclaving inside our facilities before they are put into containers that will later be collected to ensure that, in the event of an accident in transport, the material would have already received an inactivation process, thus reducing the risk of subsequent infections.

It is the producer of the waste that is responsible for correctly labelling the container and to ensuring that it is properly closed. The containers are provided with a system of staples that once closed it makes (for me) impossible to be reopened. Additionally, many container lids have an adhesive material which, when in contact with the upper edges of the container, it is attached very very strong. The above-mentioned article indicates (sic): “Controls must be carried out to ensure that the waste containers are sealed” and it is true but obviously these controls will be carried out in origin, in the same centre or hospital since if they are made in destination, and the container does not comply, implies a new transport (thus additional risk) to return it to the producer of the waste. Therefore, the control must be internal, responsibility of the waste generator.

If the container, as it seems the thesis of the article, was opened before the treatment, it is evident that it was not closed properly in origin; there are containers that may look tight but are not always properly closed.

A research centre like ours could not live without autoclaves, in short, large pressure cookers with a series of critical parameters (pressure, temperature, water quality) well controlled and safety systems for safe handling. Here our journalist slips a little by defining them as “metal container of high pressure“. If he had bothered to consult the wikipedia in Spanish he would have found: “The joint action of temperature and steam produces the coagulation of the proteins of microorganisms, including those essential for life and reproduction, conducting to its destruction. ” The Catalan version of wikipedia is even clearer, when it is defined as: “a device used to sterilize medical or laboratory equipment, uses high pressure water vapour and temperature, avoiding with high pressures that water boils and Its high temperature. The basis of the autoclave is that it denatures the proteins of microorganisms … “. The autoclave does not kill by high pressure, kills by the temperature reached. In the case in the article, a temperature of 130°C in dry, without steam, would also have high effectiveness. A pressure of two additional atmospheres, without steam, which is achieved in the autoclave in a cycle at about 130°C, is just tickles to the microbial world. In fact all the people who do immersion know that an additional atmosphere of pressure (therefore 2 atmospheres total) are those that they suffered at 10 meters of depth when diving, and 3 total atmospheres are reached at 20 meters and it does not seem that the people suffer a lot.

And now, the detective part of the article, the most interesting one…

Epidemiologically it can be very difficult to trace an infection since the pathogens are environmental, quite or very ubiquitous, broadly distributed and available in many places and it is difficult to attribute a single, directional source to many of the infections. We must recall that a chemical agent has immediate or almost immediate effects but a biological agent shows its effect days or weeks after infection (and this is a “useful” quality if one looks at bioterrorist potentialities since it allows the actor to be far away from the initial focus), and in this time interval more potential additional contacts may have been given from different sources. Only if the pathogen has a specific signature, markers not usual in the surrounding nature can be associated with their origin, often a research laboratory, working with exotic isolates (not present in their region) as it has been the case. And this has been the case because of Brucella suis  has five biovars or families (from biovar 1 to biovar 5). Biovars 1, 2 and 3 are kept circulating in wild boar and domestic; the biovar 2, in addition, circulates also among the hares in Europe. But it turns out that biovar 1 has never been isolated in Europe with the exception of Croatia and the sick person was sick from a Brucella suis biovar 1. If in addition the genetically identified strain of the patient (a Brucella suis biovar 1 strain 1330, originally isolated from a pig in Minnesota in 1950) exactly fit with a strain with which the laboratory that sent the residues to process to this plant in that period of time was working , everything becomes clear.

Publication of the case in the scientífic journal Enfermedades Infecciosas y Microbiología clínica.

And finally, two items mentioned at the article with which, personally, I do not agree. In the first paragraph  it is said that this case “According to the doctors who attended it, is the first case in the world.” It is not clear to us what they refer to, but what is evident is that it is not the first human infected by Brucella suis biovar 1. The same article that the journalist mentions in the new (see article in the journal Enfermedades Infecciosas y Microbiología Clínica)  states: “B.suis biovar 1 has been never reported previously in any species in the European Union, with the exception of Croatia, despite being a major cause of human brucellosis in America, Oceania and Asia.” The news’s sentence is then completely invalidated, at least in the context that I understand it.

The second point is already more moral, not so scientific, if you like, without being a journalist. How you can write a first sentence of the type “On February 3, 2014, a 53 year old man with a slight intellectual disability arrived at the hospital …”. What role does intellectual disability play here? Did it make the affected man more sensitive to the bacteria? Is it relevant from the point of view of public health? Do they want to indicate/insinuate that with this disability the safety protocols were not fulfilled or were badly fulfilled? Judge yourselves.

It seems is clear, however, that informing, reporting with relevant, ordered and accurate items, has to be a very difficult task.