The dog that never lost it in a crazy world 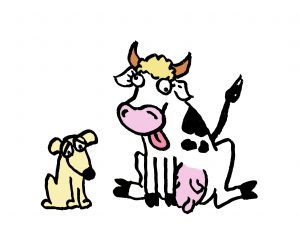 Tim was staring astonished to Josefina the cow who, with her eyes wide open, was running away, scared, towards the barn, because she had seen a little mouse crossing the yard. On her way, poor thing, she stumbled and fell. With difficulty she got up again to enter her hiding place. Joseph, the farmer, had also seen the scene and sad, It had been seven years milking her every morning, decided that the time had come for Josefina.

So the following week, once the initial sadness was gone, there was a big day at the farm … that was a lot of meat! There was even some for Tim, for Kittie and for the mouse, they all licked their whiskers. So much meat that Joseph sold half of it to the zoo of the neighboring farm, the lioness Simba had not tasted such a succulent steak for days. The rest he kept it in the freezer.

Years passed and nobody remembered Josefina the cow any longer. Tim, with his snout already turning white, for days he had been glancing at Kittie, “this cat is not herself lately” he thought. And neither was Joseph who had not been taking care of the farm for weeks. And the worst had yet to come, the first one that fell was the lioness Simba, the veterinarians of the zoo could not believe it.  A few weeks later they buried poor Kittie and, finally, Joseph passed away.

Tim, with his tail between his legs, accompanied Laia on the way back from the cemetery, Joseph’s only daughter, who, despite being a vegan, was now in charge of the farm. That night, while staring at the full moon Tim did not understand a thing, why him, a simple mongrel, had been spared from that curse? What did he have that the rest did not!?

For this question is the one that CICbioGUNE researchers in collaboration with researchers from IRTA-CReSA, UAB, LCV in Madrid and the University of Salamanca, among others, have answered in a study recently published in the journal PLoS Pathogens.

What has been discovered is the key to why dogs, despite having consumed feed contaminated with prions have never been infected with mad cow disease such as cats, zoo felines or people. The enormous resistance of dogs lies in one of the amino acids that make up their cellular prion protein. The amino acids are the components that form the proteins and the composition of these amino acids will determine the final structure of each protein and, therefore, its capacity to missfold and become an infectious prion protein.

To reach this conclusion, different approaches have been used: 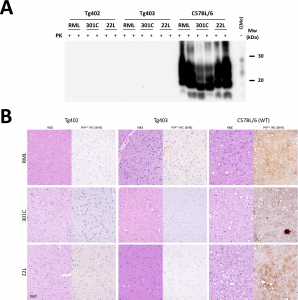 Image of the studies, some performed at IRTA-CReSA  level 3 biocontaiment unit proving that mice with the “dog mutation” are resistant to prions. PLoS Pathogens.

But the ultimate test was to take the mouse prion protein (a species we knew was susceptible to prions) and change the amino acid asparagine (from position 158) for another, aspartic acid, which is the one dogs have in the equivalent position (163) of its prion protein.

The importance of all this, beyond satisfying the curiosity of good old Tim the mongrel and that of a few scientists obsessed with the subject, is that it opens the door to discover possible treatments for prion diseases that today are still deadly and have no cure nor known vaccines. In view of the results of these experiments prions with the “dog mutation” can act as negative dominants and prevent or block the spread of infectious prions. Very good news indeed!