On May 22-25, 2018 the international congress PRION 2018 took place in Santiago de Compostela, since its first edition in Paris in 2009, this congress brings together experts from all over the world in prions, it is a  multidisciplinary meeting that gathers from doctors to veterinarians through biochemists, biologists and bioinformatics who study the structure of the molecules to give a holistic approach to a problem that is far from having a solution: the diseases caused by protein misfolding.

The meeting began with two parallel workshops, one on structure of the prions and the other dedicated to our field: prionic diseases in animals. The hot topics in this area were new features such as the recent discovery of camel’s prion disease or the update on cases of chronic wasting disease (or CWD) recently described in northern Europe .

In relation to the latter Dr. Sylvie Benestad from Norway explained that up to 19 cases of this disease have been diagnosed in reindeer but, moreover, 4 cases in Moose (one of which in Finland) and one case, also described for the first time in the nature in this species, in Red Deer. Several communications focused on preliminary results of studies on these new outbreaks were presented and it appears that the cases described in these three species correspond to three new strains of this disease that are different from the strains described so far in North America. This opens up new questions, especially about the zoonotic potential of these new strains and the extent that these outbreaks may have on European wildlife. This is most worrying in the case of reindeer since they present prion deposits both in the brain and in the lymphoid tissue, therefore, it is more likely to be a horizontal transmitted disease. In the case of the Moose, however, it seems that it could be a variant of sporadic, thus less contagious, disease. At the moment, drastic measures have been taken to contain the outbreak in reindeer, such as culling 2200 reindeer from a very specific region to prevent the spread of the disease to the rest of the country. And the case of the red deer also has a peculiarity, since at the moment, it has not been possible to discard that it is a case of BSE. We will have to stay vigilant. Another interesting debate focused on the ability of this cervid disease prions to affect people. While epidemiological studies do not seem to indicate any relationship between sporadic CJD and CWD, experimental infection studies in non-human primates (macaques) have shown that, after feeding macaques with CWD infected deer meat, they have developed a prion disease. Especially interesting to follow is a study that is being carried out by the US CDC tracking people (hunters and their families) who, without waiting for the results of the tests, are known to have consumed meat from CWD infected venison.

The first official day of the conference began with a Keynote lecture open to the general public by Dr. Stanley Prusiner, Nobel Prize Lauretae in 1997 for the discovery of prions. The conference was completed the following day with a very interesting round table that discussed on whether we should call prions to all molecules that cause protein misfolding diseases. Apart from the PrP that causes transmissible spongiform encephalopathies, there is, for example, beta-amyloid and TAU protein, which accumulate in the brains of patients with Alzheimer’s disease, alpha-synuclein, a characteristic of the Parquison disease’s Lewy bodies, among others. According to Dr. Prusiner, if all of these diseases share the same mechanism, it is necessary to speak of prions in all cases. Other scientists disagree and prefer to use the term “prion-like” to differentiate them from TSEs. Dr. Claudio Soto re-formulated the saying “If it looks like a duck, it swims like a duck and quacks like a duck, then it is probably a duck” towards the prionic version: “If it looks like a prion, it replicates like a prion and reproduces pathology like a prion, then it is probably a prion. ” 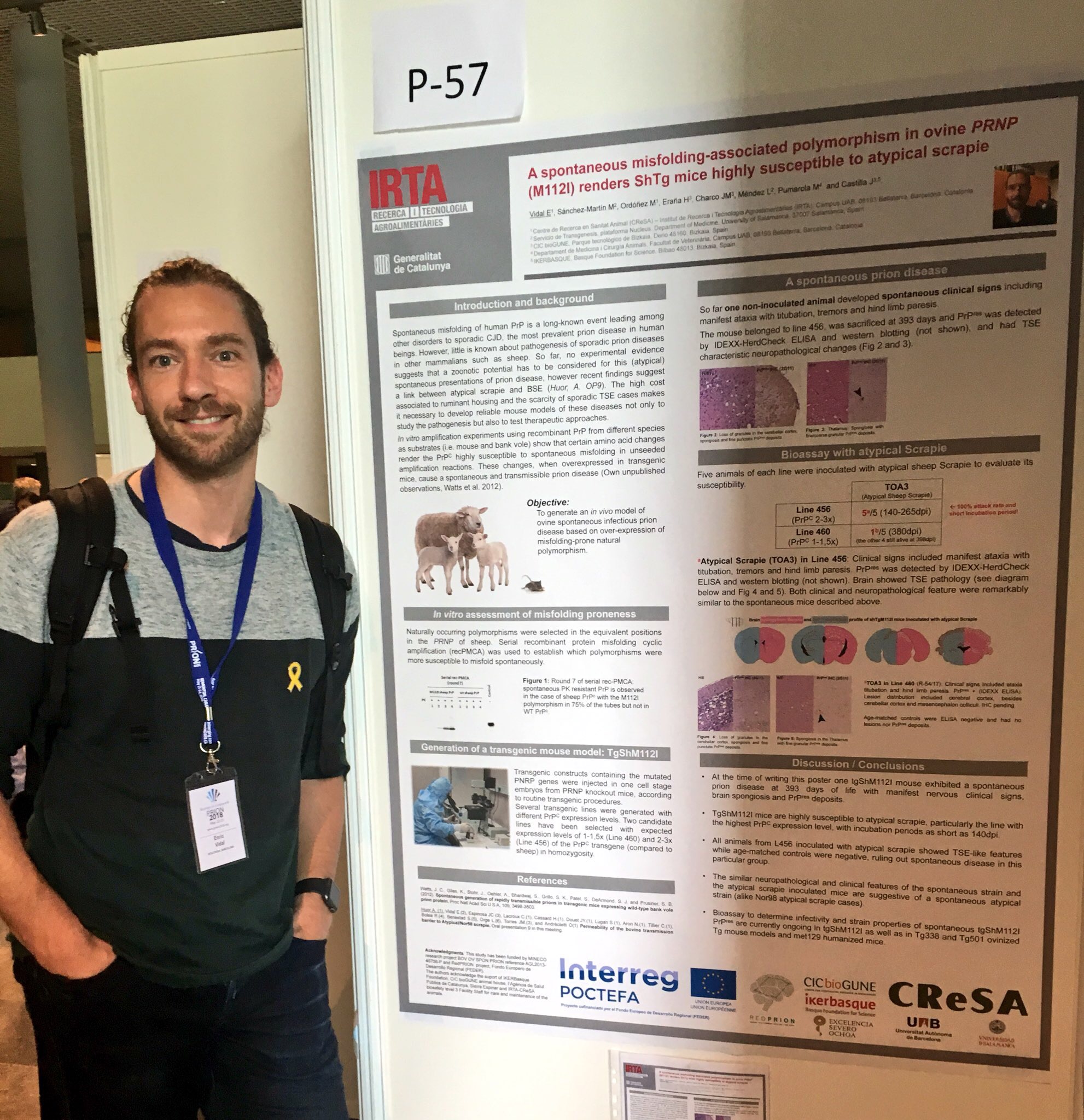 During the conference, different communications were presented with results of studies in which we have somehow participated from the IRTA-CReSA. To highlight, a poster with preliminary results of the project of the MEIC (AGL2013-46756-P) entitled “A spontaneous misfolding-associated polymorphism in ovine PRNP (M112I) renders ShTg mice highly susceptible to atypical scrapie” where, for the first time ever, we present results of a transgenic mouse model that we have developed in collaboration with Dr. Manuel Sánchez form Salamanca University that overexpresses a polymorphism of the sheep prion protein and has a spontaneous prion disease and, in addition, it is very susceptible to atypical scrapie prions (Nor98-like).

Other studies with the participation of IRTA-CReSA were part of the REDPRION network, a project a project financed by the POCTEFA INTERREG FEDER program, a project in which we collaborate with research groups in Aragón, Barcelona (Dr. Martí Pumarola and Dr. Isidre Ferrer), the Basque Country and Toulouse, France. Of these I will highlight three oral communications:

The last day of the congress a round table was held on advances in the treatment of these diseases. Unfortunately the truth is that today there is no treatment that, in the short term, seems too promising. There are several medications that are being studied, including studies in human patients, because so far all these diseases have a deadly outcome. But the results are not really encouraging, so far. As a curiosity a Japanese group, Dr. Kenta Teruya, Tohoku University, reported that one of the medications that they investigated extended the period of incubation of the disease in mice but, by surprise, teh placebo also did. Analyzing the substances that carried the excipients they discovered that cellulose ethers were those that had an anti-prion effect, a single subcutaneous inoculation of this compound delayed the death of mice infected with prions up to 600 days! We hope that this effect can be transferred to human patients in the near future.

Also, the presence of multiple associations of relatives and friends of patients with prion diseases from around the world, such as the CJD Spanish Association, which, apart from following the presentations, showed us real stories of patients affected by these diseases. A bath of reality essential to remember that behind the hours we spend in the laboratory there is the struggle of these families with a devastating illness and the hope that they have upon our work to find, some day, a cure for these diseases.

Many other presentations and posters went on research results on basic mechanisms of the pathogenesis of prion diseases, including TSEs but also others such as Alzheimer’s and other dementias, including such diverse aspects as fungal prions, an experimental prion model in flies or the role prions have had throughout evolution since, in essence, they are molecules that, by changing their conformation, are capable of transmitting information.