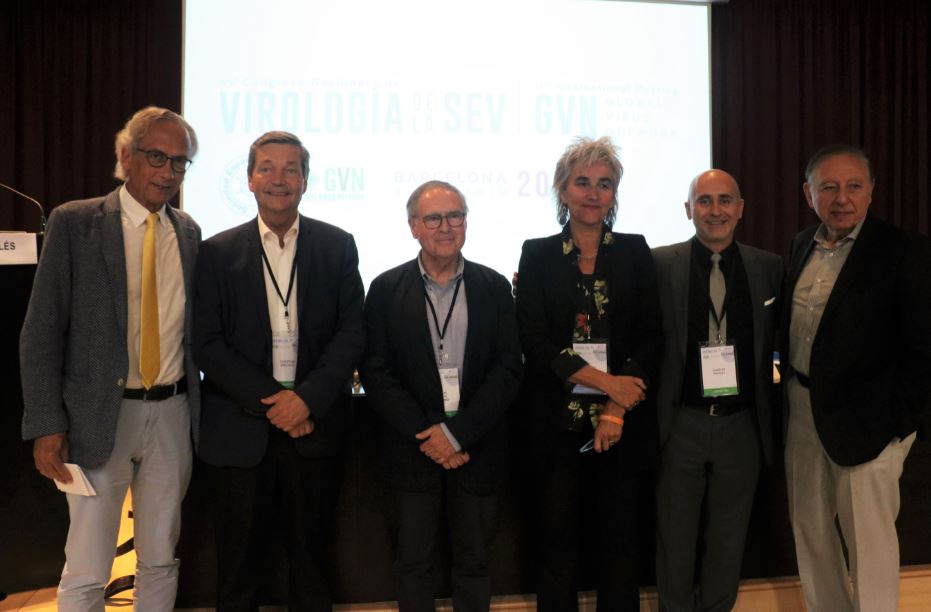 From 9th to 12th June, scientists from all over the world gathered in Barcelona within the framework of the XV Congress of the Spanish Virology Society and the 11th international meeting of the Global Virus Network (GVN). “One Health” is a concept that encompasses human, animal and plant health.

There are more than 200 known species of viruses that cause human diseases and every year up to 3 and 4 new species are discovered. More than half of these human viruses can also affect other animals such as mammals and birds. In fact, according to FAO (Food and Agriculture Organization of the United Nations), 70% out of the infectious diseases that affect humans come from animals, known as zoonoses, such as rabies, avian influenza, the Middle East coronavirus (MERS-CoV), among many others.

Scientists and medical professionals emphasize the need to take collective awareness of the link between animal health, human health and ecosystems, to work in the same direction and ensure the health of the planet. There are diseases caused by viruses that are exclusive to animals but cause a serious impact on society. This is the case of African Swine Fever, a virus harmless to human but lethal by pigs. The epidemic, of African origin, arrived for the first time in Europe, in Belgium, in 2018. In Asia, the arrival of the virus is forcing to sacrifice millions of infected pigs. The challenge is to find a vaccine for this highly contagious disease among these animals.

Globalization and climate change, the passports of new diseases

Many emerging infectious diseases come from animals and can be transmitted to people directly or through vectors, such as mosquitoes or ticks. The planet’s population growth, urbanization, the globalization of travel and commerce, and climate change make us contact with new environments, climates and new vectors of diseases. The risk of the emergence of epidemic outbreaks is higher, “now, more than ever, we must be reactive to give quick responses to epidemic outbreaks,” says Marion Koopmans, Head of the Department of Virosciences of Erasmus MC in Rotterdam and a worldwide reference in zoonotic viral diseases and emerging viruses. 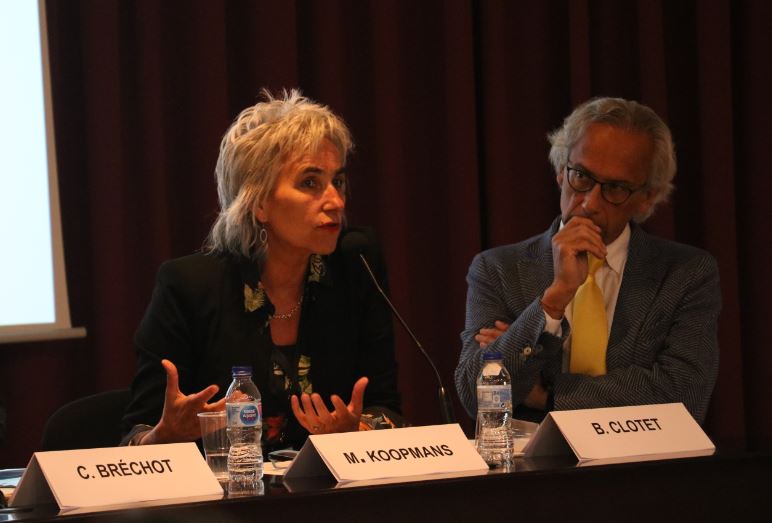 Since the large Ebola outbreak in West Africa, the need for a more forward looking research agenda has been reinforced. “We aim to be better prepared to detect emerging infectious diseases as soon as possible and curb their impact,” says Koopmans. The virologist adds that “we need to understand what causes the emergence of viral diseases. Humans and animals live in ecosystems and, therefore, we also interact with vectors. We must be able to identify any change or imbalance that tells us when the risk of epidemic outbreaks is higher.”

Another challenge is to predict which pathogens are candidates for future emerging outbreaks. “If we identify the pathogen most likely to trigger an epidemic outbreak, we can better develop preventive and control measures. However, there are unpredictable diseases so the most challenging is the need for generic preparedness research for viruses,” says Koopmans.

For some years now, scientists talk about the concept of a single health or “One Health”, the sum of the efforts of public health experts, animal health, plant health and ecosystems. “More dialogue and epidemiological information is needed between medical professionals, veterinarians, virologists and biologists to detect and prevent zoonotic diseases and food safety problems,” explains Albert Bosch, Professor of the Department of Genetics, Microbiology and Statistics of the University of Barcelona (UB) and President of the Spanish Virology Society (SEV). The association also remarks that “we must not forget the viruses that affect plants, because although they do not affect us directly, the economic consequences can be very serious when they affect crops.” In fact, the first virus that was discovered in history was in the tobacco plant in 1892. 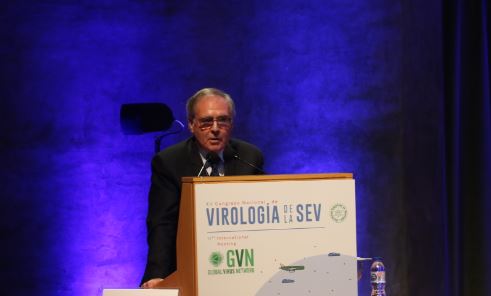 To protect public health, it is necessary to develop global coordination strategies among all the agents involved. In Spain, SEV is the reference association on virus issues that brings together expert virologists in a wide range of viruses from different research centers and universities. “We work to promote virology research, establish contacts in the international arena and offer advice when there is some episode caused by viruses and surveillance or control strategies must be applied, for example when there was a crisis caused by Ebola in Spain in 2014, “explains Albert Bosch. On the other hand, SEV coordinates the official Master’s in Virology of the Universidad Complutense de Madrid from 2010.

In global terms, the Global Virus Network is a non-profit coalition formed by virologists from 48 centers of world excellence with 7 Affiliates in 29 different countries around the world. Its objectives are to investigate and identify viruses, improve the diagnosis of pandemics, study how to control them and develop medications and vaccines to prevent diseases and death caused by viruses. Christian Bréchot, MD, PhD, the president of the GVN, and the co-founder and international scientific advisor Robert Gallo, emphasize that it is the only global institution formed by expert scientists in all classes of human virology – it also includes animal viruses. “Teamwork from GVN is essential to be prepared and respond to emerging and unidentified viruses that can threaten public health. We constantly seek solutions to problems caused by viruses in coordination with national and international institutions,” said Dr. Brechot This conference will place special emphasis on the eradication and control of emerging and re-emerging viruses in a context of climate change. GVN is also working to set regional and local expert groups to cover the needs of each region of the planet and to promote training and research programs in virology for young people. 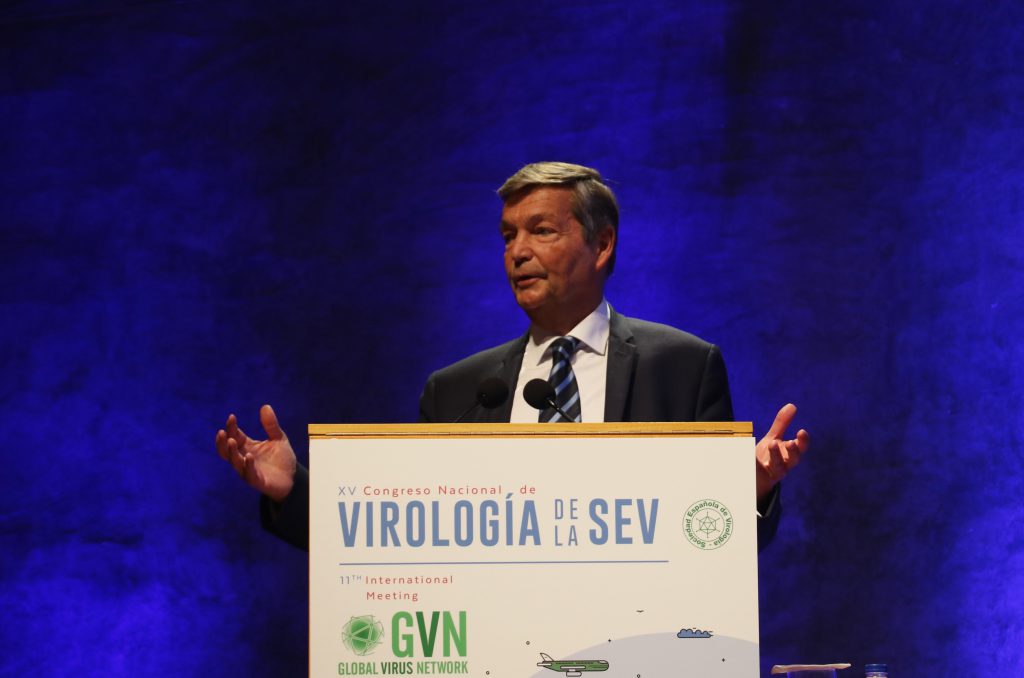 Human viruses: AIDS still circulates among the population but with less prevalence

Currently, there are 36.9 million people infected with the human immunodeficiency virus (HIV) around the world and 1.8 million new cases are diagnosed every year. According to the latest report on the Epidemiological Surveillance of the Ministry of Health of Spain 2018, in this country there are between 140,000 and 170,000 people infected with the virus. In Catalonia 31,334 people have it, according to data from CEEISCAT (2018), and 12% of these do not know it.

So far, there have been three cases of total remission of the virus in people who have undergone a stem cell transplant. The only case of HIV cure in Berlin in 2009, “the HIV-borne patient underwent a stem cell transplant to treat the leukemia that suffered, but these cells had the mutation CCR5 Delta32, which prevents the entry of the virus into its cells. Thanks to this mutation and other factors related to stem cell transplantation, the patient eliminated the virus from their body, “explains Bonaventura Clotet, doctor in Medicine, president of the AIDS Fighting Foundation, Director of the Institute of AIDS Research IrsiCaixa and Chief of the Infectious Diseases Service of the Germans Trias i Pujol University Hospital of Barcelona.

After more than a decade of research following the first case of healing, the second and third cases of patients who have managed to eliminate the HIV virus with this same therapy but in a less aggressive manner were announced this March. “These three cases confirm that it is possible to find AIDS care, but the transplant is not the most effective option, as it is a high risk procedure for the patient,” explains Clotet. The IrsiCaixa Research Institute is currently working on the search for preventive vaccines along with the Barcelona Supercomputing Center-National Supercomputing Center (BSC-CNS). Thanks to this joint work, they have created a bioinformatic method to predict the effectiveness of antiretroviral drugs against the different mutations of HIV. 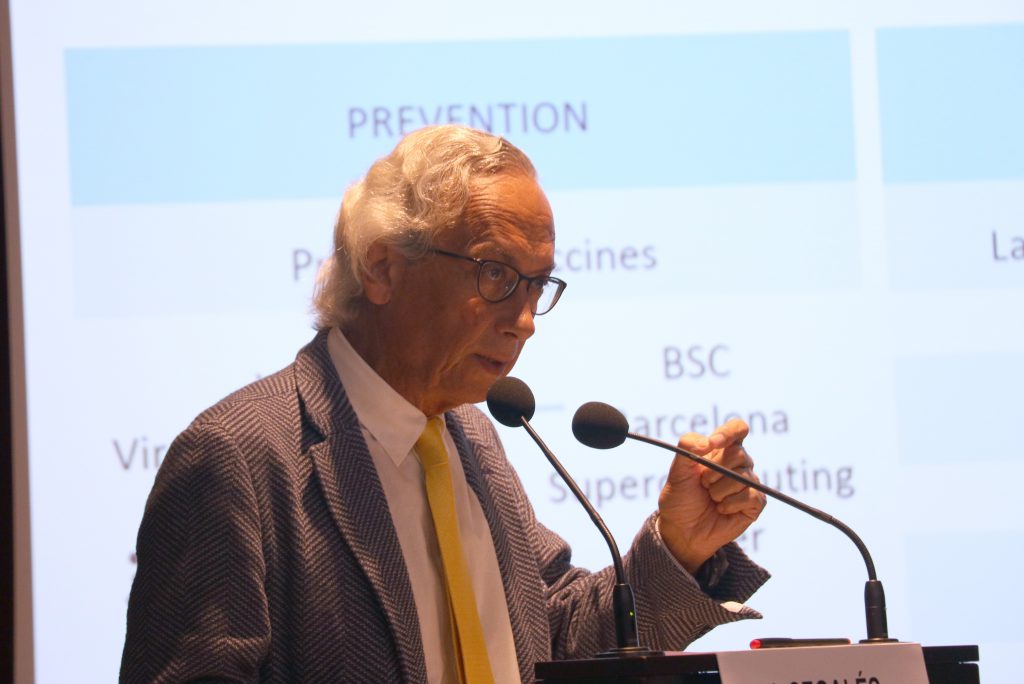 The current treatments have managed to improve the quality of life of people living with HIV in developed countries. However, they depend a great deal on the medication since if they stop taking it the levels of the virus increase immediately. Viruses that survive the treatment are hidden in reservoirs, which makes it very complicated to eliminate it completely from the body. To deal with this, researchers from IrsiCaixa and the AIDS Fighting Foundation are developing strategies such as a therapeutic vaccine, reactivating viral latency and neutralizing antibodies, which should be combined to achieve total healing.

Following this evidence, the AIDS Fighting Foundation and the IrsiCaixa research institute firmly endorse the consensus statement “Undetectable = non-transferable (U = U)”, issued by the Prevention Access Campaign of Overall, this statement of consensus highlights the fact that early diagnosis and treatment with antiretroviral therapy (ART) not only gives normal life expectancy to people living with HIV but also have repercussions on public health.

However, poverty remains the limiting factor in the fight against the epidemic in the poorer regions of the planet, such as areas of the south of the planet, Eastern Europe and Central Asia, where there is no access to the diagnosis of the epidemic. HIV and not treatment. For this reason, the AIDS Fighting Foundation initiates its first major action outside Spain. Together with Carmelo de Chokwé Hospital in Mozambique, they set up a program to combat the long-term HIV epidemic in Africa, following the recommendations of the World Health Organization (WHO), with whom the Foundation works closely. The first of the clinical trials will begin in July with the aim of establishing the best follow-up guidelines for people with HIV in the region.

Awards for the researchers 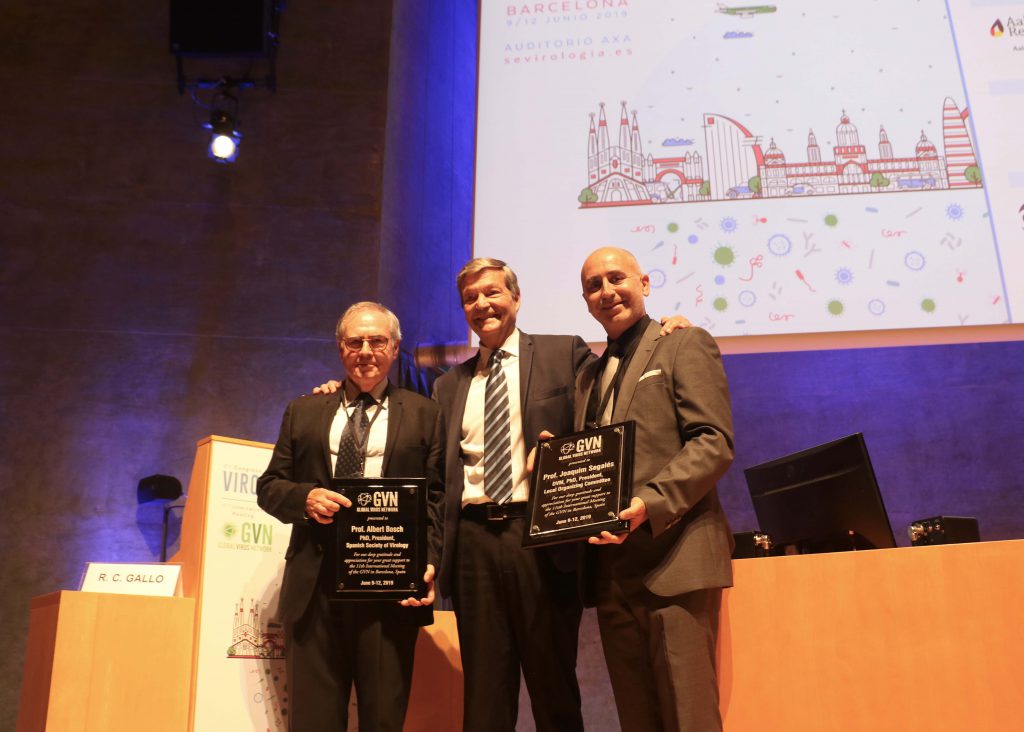 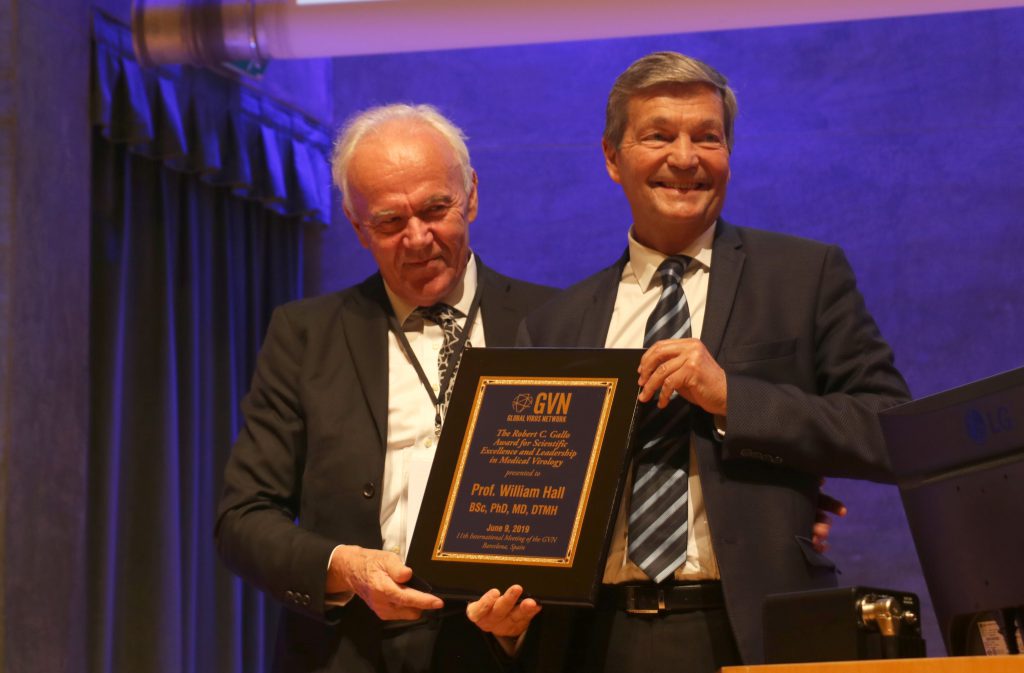