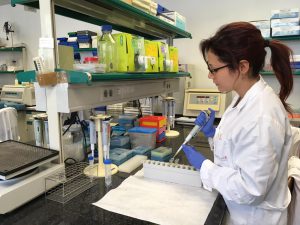 A scientific team demonstrates for the first time that neurogranin is a very reliable biomarker of diseases caused by prions in humans. This protein is found in neurons and it can be easily detected in the cerebrospinal fluid of patients in life.

Every year in Catalonia, about 15 cases of Creutzfeldt Jakob sporadic disease in humans are diagnosed. It is a deadly prion disease of which the cause is unknown and without treatment. It is very similar to the disease transmitted by the prions responsible for mad cow disease, also known as the CJD variant. The challenge has always been to diagnose prion diseases when an animal or a person suffers them, since at the moment the diagnosis is made when the patient is dead.

Recently, a study published in the Journal of Neurology, Neurosurgery & Psychiatry shows that in patients suffering from prion diseases high levels of neurogranin are detected in the cerebrospinal fluid. The work has been led by researchers from the Center for Biomedical Research in the Neurodegenerative Diseases Network (CIBERNED) of the Institute of Health Carlos III, the Institute of Biomedical Research of Bellvitge (IDIBELL) and the UMG-Göttingen of Germany, with the participation of the PRIOCAT laboratory of the Center for Research in Animal Health (IRTA-CReSA). So far, some studies have already shown that patients with neurodegenerative diseases such as Alzheimer’s have higher levels of this protein in the cerebrospinal fluid. “We have now verified that people who suffer from the sporadic Creutzfeldt Jakob disease happen the same but more exaggerated,” says Franc Llorens, a researcher at CIBERNED and IDIBELL.

Neurogranin is a protein found naturally in neurons. His role is to participate in the process of the synapse and can be detected by analyzing the cerebrospinal fluid, “a fluid that surrounds and protects our central nervous system and fills its cavities or ventricles, therefore it can give us much information about what is happening to the brain,” explains Enric Vidal, researcher at IRTA-CReSA. There are currently several methods to help diagnose prion diseases, but they are not completely reliable. In fact, these diseases can only be diagnosed with absolute certainty by analyzing the brain of the dead patient. “This finding will help us to make diagnoses of greater reliability, since it is a biological sample that can be obtained when the patient is alive and is relatively easy to obtain with a lumbar puncture,” the authors of the study confirm.

More information of the disease’s pronostics

According to experts, today it is impossible to predict the duration of prion diseases, since they depend on many factors and some of them are still unknown. In this study, however, it has been detected that the levels of neurogranin are associated with the duration of the disease. “Neurogranin is a marker of neuronal damage. When we find it in high quantities, it is indicating that neurons are harmed, therefore the disease will move faster, it will have a short duration, “explains Franc Llorens. This information will help the experts to predict the clinical evolution of the Creutzfeldt Jakob cases and to better select patients according to their condition, as well as to interpret better clinical trials to find antiprobic therapies.

Some phases of this study have been carried out in the biosafety level prion laboratory 3, located in the facilities of the Center for Research in Animal Health (IRTA-CReSA). PRIOCAT is the only laboratory in Catalonia that works with animal prions and maintains an agreement with CIBERNED to carry out experiments with these highly pathogenic agents also in samples obtained from human patients.