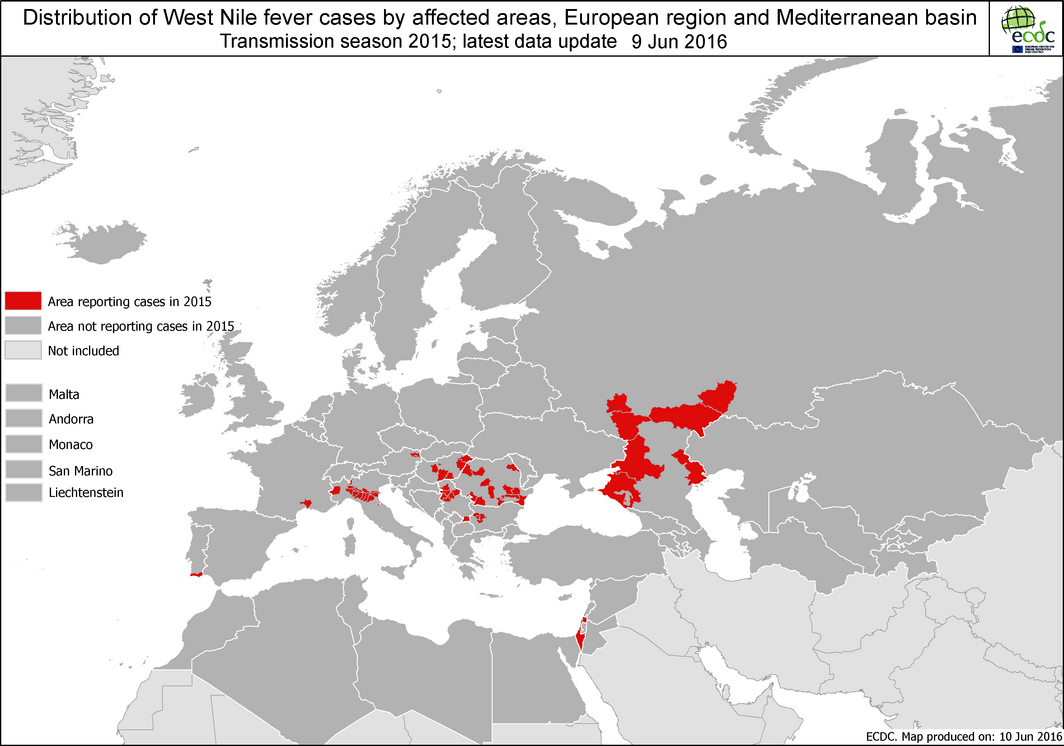 A little over a month ago  the“The European Union summary report on trends and sources of zoonoses, zoonotic agents and food-borne outbreaks in 2015” was issued, a joint initiative of the European Food Safety Authority (EFSA) and the European Centre for Disease Prevention and Control (ECDC). It is undoubtedly a long document, more than 230 pages long. I’m sure other CReSA scientists will extract and explain other facts from this report (the focus on Salmonella, Campylobacter, Listeria and Yersinia accounts for almost 50% of the report) but I will extract the part corresponding to viral threats and outbreaks taking into account my previous expertise and interests.

Some previous comments … this report affects 2015 because the data must be elaborated, aggregated and disaggregated with care; And this takes time, so it is not included, for example, the noroviruses outbreak of Andorra that ocurred this year 2016, nor the cases of Crimea-Congo in Spain, for example.It does not include imported zoonoses, for instance, cases of Chikungunya, yellow fever, etc, which show its symptomatology in the EU but are acquired outside their borders; in addition, these cases will not trigger outbreaks, usually, in the absence of vector.

I will review the report, therefore, focusing on what the report cites about Rabies virus, West Nile virus, calicivirus and other food borne viruses. 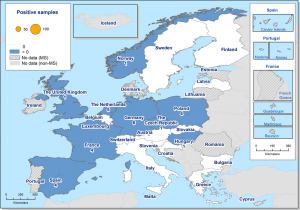 Detecction of  Lyssavirus in bats in Europa in 2015.

The notification is compulsory in the majority of MS. The identification is based on the detection of antigen, the viral genome or by molecular techniques (real-time reverse transcriptase polymerase chain reaction, RT-PCR) and/or viral isolation both for human and animal cases.

The small number of cases of rabies is probably due to that many countries have implemented eradication programs, co-funded by the EU, which consist of:

Most countries with active campaigns form a belt (Finland, Latvia, Estonia, Lithuania, Poland, Slovakia, Hungary, Romania, Bulgaria, Greece), which try to prevent the entry, the reintroduction of rabies from Russia Turkey. But beware, because hazard can also go into Europe from Morocco via Spain.

In addition, more than half of the MS have detected Lyssavirus in their bats (including Germany, France, Spain) with a positivity rate of about 2% of the tested samples (an equivalent rate to that of 2014; no increase observed).

In short, rabies is an extremely rare zoonosis in Europe, which nevertheless kills more than 50,000 people annually in the world. Absolutely preventable by vaccination is, however, fatal if one waits until the typical cynical symptoms are observed. Cases in Europeans, when they exist, are linked to travel in areas where infections are frequent. The problem is that the wild, sylvatic, cycle of rabies is still potent, endemic in countries surrounding the EU, which leads to a continuous drip in reintroductions.

Therefore, even with the very strong reduction of its circulation, rabies, which is considered to be eradicated in Western, Nordic and central Europe, is still circulating within the EU to wildlife, foxes and raccoon dogs (Nyctereutes Procyonoides) or raccoons (Procyon lotor). 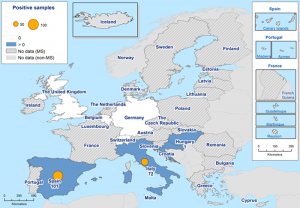 Detection of West Nile virus in dead bird samples . This type of analysis is performed in IRTA-CReSA.

West Nile virus, WNV, resulted in 127 human cases, with no increase in incidence. The reporting of cases in humans is mandatory in the great majority of countries, but only in a few cases it is also mandatory to report cases in animals (horses, wildlife). The most affected country, Italy, and particularly the Milan area, where there was no previous history of autochthonous local transmission. The levels in Hungary and Romania were stable and Greece didn’t show occurrence. Positive birds and solipeds infected with WNV have been detected in several countries: Croatia, Italy, Hungary, Romania, Portugal, and Spain. Two fatal human cases (Hungary and Bulgaria).

And what about the viruses classically transmitted by food?

Salmonella, a bacterium, and non-botulinum bacterial toxins have the greatest impact on total numbers of hospitalizations and deaths, but caliciviruses (including noroviruses) are the main cause of outbreaks (285), affecting tens or hundreds people (12,500 cases; 1,200 in a single outbreak in Switzerland, over 5,000 in three outbreaks in the Czech Republic); And account for a third of all fecal-oral transmission outbreaks. The pattern, therefore, consists on “large outbreaks” of viral aetiology, with many affected but “low severity” (that fits with catering, schools, day care, restaurants, pubs, etc.), against many, many small outbreaks of bacterial aetiology (that fits with a domestic transmission, at home), but that give punctual cases very serious or fatal. Of the 12,500 cases attributed to caliciviruses, only 349 required hospitalizations and a single fatal case was counted. In fact, calicivirus are one of the members of three of the five dance partners (I recommend you check entry 15 of your own blog, in catalan) involved in high-impact toxo-infectious food outbreaks: calicivirus and water, calicivirus and buffet food and calicivirus and other foods.

In terms of distribution, France reported ¼ of all European outbreaks of calicivirus (including norovirus) followed by Poland with 15% and Lithuania with 13%. If we take the outbreaks of which there is strong evidence of cause by noroviruses the foods mainly involved were: shellfish, crustaceans, bivalves and derived products; Other foods (eg, forest fruits); Food mixes, and buffet food. And if we take into consideration the contributing factors these were: “infected food handler” or “cross contamination” in 11 outbreaks and “unprocessed contaminated ingredient” in 9 of the 22 strong-evidence noroviruses outbreaks.

Compared with calicivirus, all other fecal-oral transmission viruses pale.

Hepatitis A virus generated 13 outbreaks with 78 cases, 49 hospitalizations and one fatal case, in a total of 5 countries (Finland, Germany, Greece, Hungary and Poland). Only in one outbreak was assumed that the transmission vehicle was seafood/bivalve; All the rest has unknown source. Regarding the place, of those outbreaks that could be ascertained, half had its epicentre in restaurant/cafes/catering services and the other half one were household.

Rotavirus were the other highlights; Of the 100 food outbreaks not due to caliciviruses, rotavirus have been found strongly or probably involved in 45 outbreaks, accounting for 79% of the cases (more than 600 affected). The most affected country, Poland (78.4%).

More anecdotal but interesting are the food outbreaks due to flaviviruses and associated with milk consumption (raw goat’s milk, in three outbreaks). These outbreaks were characterized by the high severity of the clinical disease, with 13 hospitalizations and 2 fatal cases among the 14 cases involved.

And finally the main vehicles were the other meals, the mixtures of food; Crustaceans, shellfish, bivalves and derived products … the usual suspects, in short.

The report shows a very similar 2015 with respect to 2014. And this is at this way because the European public health improvement in this field is also linked to the improvement of the public health of the surrounding countries. Again, the concept of One Health, not only applicable between animals and humans, but also among people from different countries is shown clear and crystal to us.