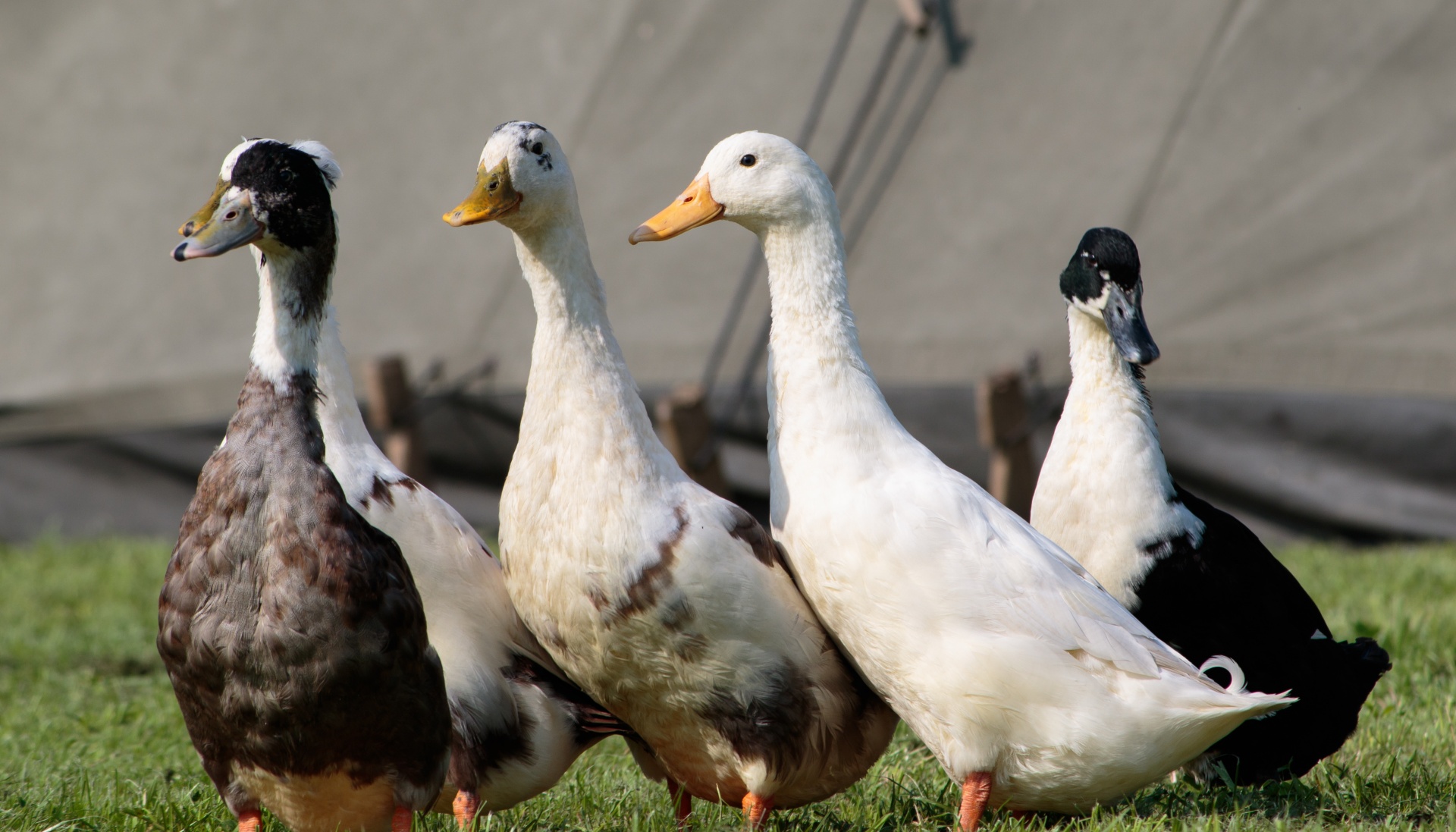 It already seem distant history the outbreaks of H5N8 highly pathogenic, for birds not for people, avian influenza,  which took place a few months ago in Catalonia, which had an index case featuring a stork found dead in early February in the Aigüamolls de l’Empordà. The outbreak is over and nowadays, the farms, after the entry of sentinels that have given negative results are again under exploitation.

Yes, sentinels. After an outbreak all animals are removed from the farm (infected or not since HPAI is highly transmissible and a duck that one day is  negative, the following might become positive, thus, infected). Then inactivation is carried out of the bedding, stools and all materials in contact with ducks including the facility itself: floors, walls, ceilings, utensils, etc. Once disinfection is performed, susceptible animals are entered in the facility to serve as sentinels and are left for a few weeks on the farm to confirm that non of them gets sick. Samples are taken to confirm through sensitive techniques (nucleic acid amplification) the presence of the virus. If susceptible animals or sentinels do not become infected it has been proven “in vivo” that the installation is safe and can resume production.

We tiptoed over a topic, but how do we remove the duck manure from the affected farms?

We’re not talking about a few cubic meters (m3), we are talking about hundreds of m3 that are potentially infectious, especially the first few days.

Are we sure? In all cases? Burying manure is not feasible for environmental reasons and due to the likelihood of the problem spreading through groundwater. It should be performed in conditions very difficult to accomplish from a technical and economic point of view. 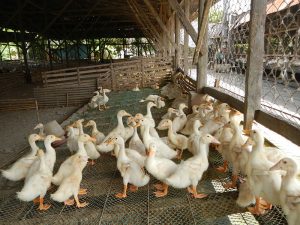 Alternatively we can transport them to a waste water treatment plant or a plant that uses manure to produce energy as a biogas plant!!!

Are we sure about that? Do we have trucks with sealed containers not to release any liquids or droplets to the air? Are we sure that in the process of loading these materials into the truck, some of which will be dried and of a very small size, we are not releasing aerosol-like particles to be disseminated by the wind?  Can we guarantee that no infectious material will be accidentally released during transportation? Imagine this can be assured for one transportation? Perfect. But what if we perform five transportations? And if we do 25 trips? The transport of potentially infectious material has proven to be a risk factor for the spread of avian influenza virus in poultry farms (McQuiston et al., 2005). If we have no choice, we use a sealed transport and move the material  within the protection zone (remember that each affected farm is the center of 3km  circle of radius protection zone, and of another circle of 10km radius  labelled as  surveillance zone). Not to export the problem of the truck beyond the circle, the treatment must be done within the area. By the way, the biogas plants will introduce the manure in a digester at 38-39ºC for 40 days, well above the capabilities of environmental resistance of influenza viruses. Virus and other biodegradable material will suffer an anaerobic digestion (absence of oxygen) generating a variable gas composition, i.e. biogas (50-70% methane CH4, 30-40% CO2, <5% of hydrogen and hydrogen sulfide).

So what happened finally?

A slow and somehow passive, but safe, solution was adopted. Slurry (beds, stools, etc.) was left in the same farm for a period of 60 days, two months after emptying. This material also had received an input of cleaning and disinfection products, and suffered temperatures of more than 20-25ºC or higher in the case composting begun of 35-40ºC (although the temperature parameter was not minitored) during many hours of the day. And? Here the environmental persistence of influenza virus was played. Avian influenza virus, whether it be a LPAI or HPAI virus strain,  is an enveloped virus suffering at ambient temperatures in the absence or scarcity of water. Influenza can survive a few weeks at most at 20ºC; a few days at 37ºC, and a few hours or minutes 56-60ºC (USDA, 2015); mixed with fecal material form chicks, loss of infectivity is much faster, from 24 hours at 30-37ºC to 2 days at 15-20ºC to reach total loss of infectivity (Lu et al., 2003). In a situation of strong desiccation or drying the envelope becomes disorganized and the virus becomes inactive (IRTA-CReSA own data). Applying environmental temperatures (ie without heat and therefore no energy consumption) and drying at the atmosphere viral infectivity was falling continuously and inexorably without any action or additional cost  needed, a process that could be described as “natural”.

Another “natural” process to consider, which was not strictly applied in this case, but resembles the one explained in the previous paragraph, and counts with experimental evidence that it works (Senne et al., 1994; Bendfeldt et al. 2006; Elving et al., 2012) is  composting. A relatively economical and environmentally sustainable alternative, which can be run on site to avoid transport of contaminated material. It implies to leave microorganisms in the environment and those still present in the waste to perform mesophilic (temperatures between 20 and 40 ° C) and thermophilic digestion (generating heat, reaching temperatures of 50 and 60ºC) transforming waste to turn it in a completely different “thing”, enriched in nutrients that could be used as fertilizer (in this case, however, the inert material should have been eliminated, by incineration, as a precaution). Under proper composting, HPAI viruses were inactivated within 10 days (Senne et al., 1994); in other studies the time to reach 12 log10R, that is, to “kill” 1,000,000,000,000 viruses was calculated to be within seven hours in the worst conditions, temperatures of 37ºC (Elving et al., 2012.). To achieve a completely efficient composting it would be needed to aerate the mixture; otherwise, stratification can occur with mesophilic digestion at “low temperature” on the surface of  and thermophilic inside. This, however, can be solved by covering the pile with a plastic sheet. In the case of waste known to be contaminated one would think that we should wait a few days to start the mix, asuming some risk of anoxia inside the stack,  because any aeration operation involves release or re-suspension of particulate matter. However there are studies (Elving et al., 2012) that show that even in the mesophilic area (35-40ºC) inactivation of pathogens such as HPAI virus is more than enough. And there are systems such as Passively Areated Windrow systems (PAWS) that allow safely composting of mixtures without risky aeration operations (Schwarz and Bonhotal, 2015), although this system is heavily dependent on the type and origin of the elements of the stack, it would even allow the elimination of animal carcasses and simultaneously inactivating pathogens involved (Flory and Peer, 2009). 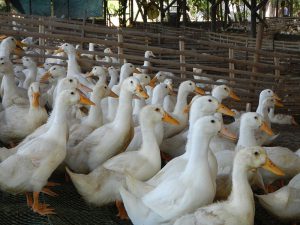 In any case, the last two solutions mentioned, the inactivation of influenza virus, its viral RNA degradation is not only a direct function of temperature but also of the microbial activity during the process. Viruses, wrapped or not, they are still made of protein and, as such, are consumed by bacteria and fungi that grow during composting. The more intense the microbial activity is in the stack, the faster and more efficient composting, and viral inactivation, will be.

To do this exercise in advance and/or gather any information on the activities done after an emergency and digest them to deal with the next emergency, is and always will be, the wise thing to do. Although the next one will never, ever, be exactly the same, maybe not even similar at all.

Some of the consulted references: