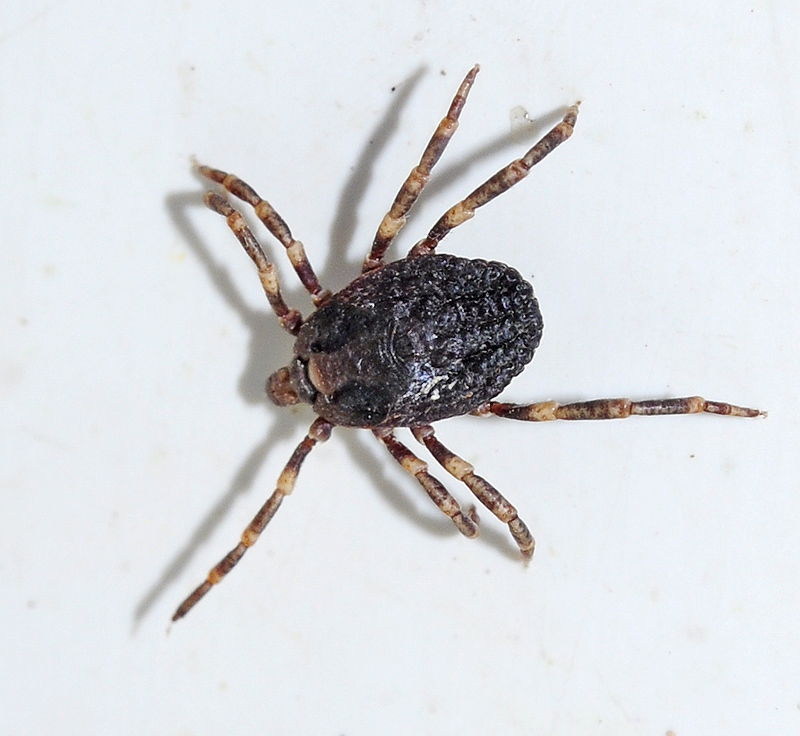 The interest of society towards certain subjects fluctuates up and down, until the matter eventually leaves the scene. Even though Crimean-Congo news no longer appear on newspapers we will write a second post, and maybe last, for now,  dedicated to this virus. A few ideas will be reviewed regarding the epidemiology, the potential distribution of the Crimean Congo hemorrhagic fever virus (CCHFV onwards) in Spain and Catalonia, also about its pathogenesis and how it affects our health systems. A patchwork-post, if you like, not one with a linear style but brushstrokes to outline the global painting…or al least to give a quick hand of paint to the wall.

Patch 1: Much more could have been done… and better. Let’s start with what the  Spanish Ministry of Health  recommended in 2011, when the virus was first detected in Spain:

These recommendations were made in 2011. What has been done since then? Bear in mind that it is not my topic (I’m more focused on biosecurity issues) but after scanning through accessible open sources of data the answer is “almost nothing, almost zero,” and what has been done, in fact, is merely the result of individual actions. All points imply a certain cost and some involve what we could call monitoring … to look for the presence of virus sampling ticks to see if they carry the virus genome, which would mean that the tick is infected. Remember that once infected a tick remains infected all its life. And the CCHF virus has the ability to move from one tick stage to another; an infected tick larva will yield an infected tick nymph, which, in turn, will yield an infected adult tick (it is called … trans-stage transmission). The samples had to be analyzed and, thus, needed some diagnostic techniques, better validated and that are also time and money consuming. A serological surveillance, well designed should have been carried out in wildlife, but also in livestock of the affected area, Caceres and neighboring  regions, to verify the presence of specific antibodies against Crimean Congo. These results would reveal the extent of virus circulation and strengthen the evidence obtained from the genome detection through molecular biology techniques. If we had had this information perhaps one would have seen the need to inform and “train” health professionals in the area  regarding the specific and non-specific symptoms of Crimean Congo. It is normal, very normal in fact, that if a disease is not present, diagnostic errors or delays might occur. It is indeed normal for diseases such as classical swine fever and African swine fever, absent of Spain and Catalonia for decades, that veterinarians who would be able to diagnose them quickly are scarce because all they know is not through direct experience.

To say that nothing has been done, however, is not entirely true …there is actually one study that tested 231 Hyalomma marginatum ticks collected from cattle brought to slaughter for the presence of genomes CCHFv in Castilla León on 2014. All proved negative… however a study that analyzes just one tick, yes, you read that correctly, one tick from Badajoz, one from Salamanca or 4 from Avila does not seem to have much criteria or statistical significance. Besides, cattle samples lived quite far away from wildlife sources of infection.

More interestingly, an analysis was performed between 2011 and 2013, of 681 ticks of the species Rhipicephalus sp., Hyalomma lusitanicum and Hyalomma marginatum. Of the total of 681, 24 gave positive results for CCHFv, all coming from Extremadura, and all belonguing to the species H. lusitanicum. Almost all detected viral sequences were identical and homologous to those included in genogroups III. In this study we must add 272 ticks collected in Extremadura in 2014, of which three ticks yielded a positive result, those ticks were samples from a deer, a fox and a cow, respectively.

What about humans? Yes, there is a study to detect the presence of CCHFv antibodies in people from Caceres, all gave a negative result, there was no seroconversion.

Not much but the data points to a wildlife cycle already established and therefore potentially susceptible to jump to humans at any given moment.

Patch 2: We are connected, and today facts have roots, at least back to 2010. The genome identified in positive ticks from Caceres in 2010 is very similar to the genotype (or genogroup III) circulating in Africa and different form the IV genotype that is characteristic of the Balkans. Since CCHFv was also detected in  Hyalomma marginatum ticks collected from migratory birds in Morocco in 2011, the most likely route of introduction must have been those migratory birds, but decades ago. The current incident has nothing to do with a recent contribution of birds. Apparently, there is no doubt that a closed cycle of infection and spread independent of external inputs already exists.

In addition, preliminary genetic analysis of a small segment of the genome sequences show high similarity between the two human cases detected and the sequence of CCFHv detected in  Hyalomma lusitanicum ticks from 2010 to 2013. The circle is closed and connected.

Patch 3: Everything that touches Crimean Congo is risk group 4? The answer to this question hits on an important issue such as the handling of suspected samples. A significant difference exists between samples from people with compatible signs and those samples from passive or active surveillance actions, ticks, for example, or blood of animals like cattle, sheep, pigs, etc. taken to obtain serological evidence of virus circulation.  Samples with a reasonable chance of harboring CCHFv, as determined by medical criteria, must be handled in a biosafety level 4 facility, the maximum possible. Once the sample has been processed and inactivated it can be manipulated at a lower biosafety levels such 3 and 2. While this is true for samples from patients, it does not apply when sampling ticks in the search for the virus. We must, in the field, reduce handling to a minimum, avoid aerosol formation phenomena (do not crush the ticks, for instance) use appropriate PPE (gloves, at least) and use hand sanitizer and a repellent… no need to be a bug magnet. Once in the laboratory, microbiological good practices aside, handling should also b reduced to a minimum, avoid aerosol formation (homogenization of the tick should be done in closed systems), and inactivate a fraction of the homogenate, then, the material is no longer considered infectious. Therefore, screening and analysis of samples of a monitoring plan could be done in a biosafety level 3 perfectly and CCFHv serological studies for ruminant movements and other animals in a biosafety level 2.

Patch 4: Not very transmissible but very dangerous. There is no viraemia during the incubation period. This is important because a person who does not show compatible symptoms apparently CANNOT transmit the disease. The likelihood of transmission will be much higher as we move into the different stages (pre-hemorrhagic stage, hemorrhagic stage, resolution stage, a.k.a. convalescence). But nothing is absolute in biology … it is likely that some cases CCHFv have been  sexually transmitted by infected men (as well as women) to their women partners (as well as men) just one or two days before the onset of symptoms. A phenomenon of low probability but yet transmission alternative indeed (for more details … click here). 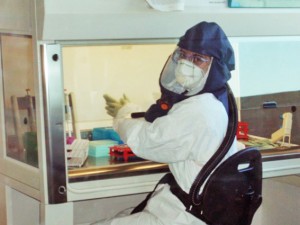 As a corollary, nosocomial infections are possible if a correct diagnosis is not established and consequently the medical staff does not take proper precautions or misuses personal protective equipment. To this end, in addition to gloves and suitable clothing, antiparticles FFP3 masks or equivalent, and watertight glasses or screens are essential for the possible airborn aerosol from bodily fluids of the patient, as well as physical barrier against possible transmission by fomites to prevent hands-to-mouth contact. As an example, a multi-centric retrospective study in nine regional Turkish Crimean Congo reference centers, in the period between 2002 and 2014,  identified 25 confirmed laboratorial nosocomial infections, including four fatal cases from 51 health workers exposed.

The second corollary, in principle this should not affect blood donations. Therefore no need for restrictions or screening of donors. In addition, in case of introduction of CCHFv donations, due to the physicochemical characteristics of the virus particle. It is an enveloped virus. The treatment of blood products (heat treatment) and those designed to control HIV (solvent-detergent and nanofiltration later) guarantees the safety of the blood. That is not the case for Zika, since some episodes of transmission from blood donations have been described.

Patch 5: Can a doctor, depending on the viral load of a CCHFv infected patient, know the prognosis? Theoretically, and with the obvious safeguards of any specific individual, yes. This was shown in a 2007 study (for more details click here).  The authors were focused on the frequency of nosocomial infections, or within in the family of patients… secondary transmission from a person infected by the bite of a tick. Since ribavirin, which is used as a resource on infected patients, has severe side effects in some cases it must be carefully considered to whom this treatment should be prescribed… if not necessary, medication is best not given. The experiment consisted of taking a group of infected patients who were classified into three categories based on the severity of the disease: fatal, serious or moderate in terms of symptoms and levels of certain metabolites in blood. Then they began to measure the CCFHv load of the as well as the IgM and IgG antibody title. What conclusions were drown? The number of viruses in blood, the viral load was the best predictor. With levels of one billion virus copies per milliliter of blood, the outcome was always fatal. Below one million copies of the virus per milliliter, the person was healed. A cutoff could not be established to distinguish between moderate and severe cases. In addition, the detection of high levels of IgG inversely correlated with viral titles, the more Antibodies lower viral load, suggesting that these antibodies could neutralize the circulating virus.

Patch 6: A thorough management of the CCHFv distribution involves the categorization of areas and action packages. An interesting article by Mertens et al. 2013 makes a series of public health considerations related to this disease. For a good management in the European Union, states should be classified according to potential habitats of ticks and depending on degree of animals traffic in endemic areas. Thus,  five areas should be defined: (0) areas not suitable habitat for ticks with no traffic of animals from endemic areas; (1) areas with suitable habitats for animals but without traffic; (2) areas where we know there are Hyalomma populations and traffic of animals from endemic areas; (3) in border areas form endemic areas and (4) endemic areas. Depending on the objective classification, each state should take a different package.  Such as:  “do not take measures – do not inform – do not educate” package (but maybe have diagnostic tools ready for VFHCC) suitable for (0) zones. Or “surveillance to animals, humans and ticks” which would be appropriate for a zone (1). In addition to such monitoring, information to medical personnel and other staff at risk, who would be recommended for a zone (2) (which until two weeks ago was the situation in Spain, if certain test and studies were ignored). For a Zone (3), in addition to everything mentioned previously, controlling the movement of wildlife, education and training of health personnel, but also to the public, regarding transmission, clinical symptoms and measures of protection. Finally for zone (4), endemic areas, tick populations control should be added, use of repellents on animals, and the study and control of the flows between wildlife and livestock. Since an area is defined as endemic if human cases have been reported, or if the virus has been detected in animals or ticks for at least two consecutive years it can be said that since 2012, Spain is probably endemic. In any case, with two confirmed cases in 2016, following the authors criteria, Spain is now endemic for CCHFv.

In short, episodes of CCHFv transmission in Spain are to be expected from now on since:

One Response to Viral comments (27): Crimean-Congo, the wave passed… for now.