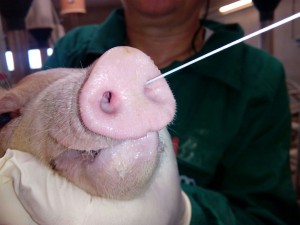 The microbiota, the community of microorganisms on a particular body site, has been extensively studied during the last few years, and demonstrated to influence the development of many diseases. The nasal mucosa of piglets is colonized by bacteria early in life, constituting the nasal microbiota.

Among the nasal colonizers, Haemophilus parasuis has also clinical importance, since it is the etiological agent of Glässer’s disease. This disease produces economical losses in all the countries with pig production, but the factors influencing its development are not totally understood.

A healthy status was associated to higher species richness and diversity. 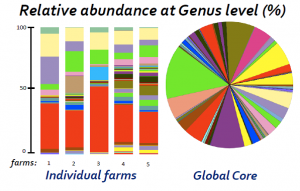 Relevant findings of this work include the fact that several pathogens showed an increased abundance in diseased-farms, such as Streptococcus and Haemophilus, together with bacteria from the Mycoplasmatacetae family. Also, healthy status was associated to higher species richness and diversity, as shown before for other diseases. The bacterial groups that were found to be more abundant in healthy piglets, such as bacteria from the Firmicutes phylum, deserve detailed analysis to identify possible beneficial probiotics capable to prevent this disease.

This study, conducted by researchers from IRTA-CReSA has been published in the scientific journal BMC Genomics:

This study is part of the project “Re-visiting animal models and protection in Glässer’s disease and the role of the respiratory Microbiota” (AGL2013-45662-R) funded by MINECO.