IRTA coordinates the group ‘MIXOlepus’ to face mixomatosis in the hare

Myxomatosis is a disease that mainly affected rabbits, but recent outbreaks have been detected in the Iberian hare for the first time. The working group ‘MIXOlepus’, coordinated by the researcher of the Animal Health Program of IRTA Ignacio Badiola and from the sub-program of endemic diseases, will study the disease with the aim of developing a vaccine.

Recent outbreaks of myxomatosis in the Iberian hare have triggered a hunting emergency. In the summer of 2018, it was the first time the disease was detected in this wild animal. In view of this situation, the Animal Health Research Center (IRTA-CReSA), in collaboration with the Ministry of Agriculture, Fisheries and Food (MAPA) and the financing of LABIANA Laboratories and Artemisan Foundation, has created the ‘MIXOlepus’ work and research group ‘to find solutions.

Myxomatosis is an infectious disease caused by a virus that rabbits suffer and that is characterized by the appearance of swelling of mucous membranes and skin. Recently, outbreaks of myxomatosis have been detected for the first time in hares from the Iberian Peninsula. Currently, there are more than 250 confirmed cases in nine autonomous communities: Andalusia, Aragon, Castilla-La Mancha, Castilla y León, Valencia, Extremadura, Balearic Islands, Madrid and Murcia.

In view of this emergency situation, the objective of ‘MIXOlepus’ is to look for measures to prevent the disease through vaccines and the sustainable management of hare populations. For this, ‘MIXOlepus’ will focus on knowing in depth the impact of this disease on hare populations. Second, analyze and sequence the virus isolated in hares and study its similarity with the myxomatosis virus described in other animal species. Also, this group will work to develop a vaccine against hare disease and evaluate its degree of effectiveness. On the other hand, ‘MIXOlepus’ will also disseminate the results and recommendations so that the reserves develop good management practices and sustainable hunting of the species and help monitor the presence of the virus.

Collaboration of the hunting sector is sought

The competent authorities in animal health of the Autonomous Communities of the Autonomous Communities will carry out during the next weeks an epidemiological survey in the preserves that have been affected by the disease in hares during the last season, in order to know the real scope of the same and whose results will be analyzed within the working group ‘MIXOlepus’. On the other hand, Fundació Artemisan is conducting surveys at the national level to know the general situation of hare populations and the management that is being carried out in hunting grounds, both affected and not affected by myxomatosis, together with a scientific field work in Autonomous Communities such as Castilla-La Mancha, which has the support of the Community Board.

Also participating in this initiative are scientific groups from the Universities of Oviedo and Córdoba and technical staff from the Central Veterinary Laboratory of Algete, as well as the Royal Hunting Federation of Spain and the Spanish Galgos Federation. 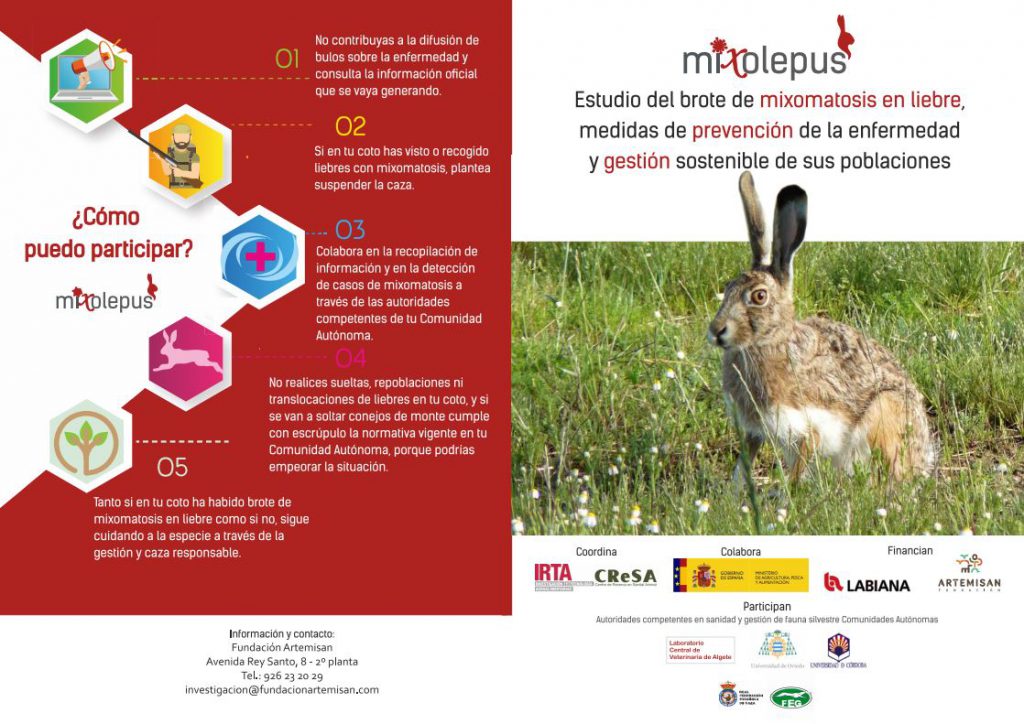