What is Chikungunya virus doing in Catalunya? 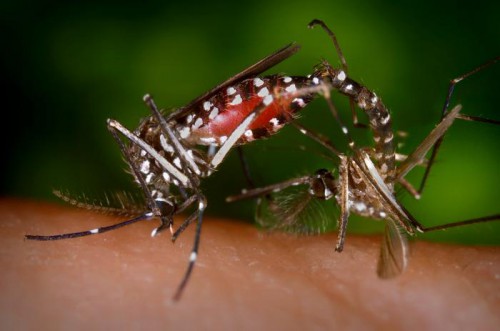 Chikungunya is a mosquito-borne viral disease causing symptoms such as fever, joint pain, muscle pain, headache and nose and gum bleeding. Chikungunya is present in parts of Africa, Southeast Asia and on the Indian subcontinent. The most recent large outbreaks were reported in 2005–2006 from Réunion Island, Mauritius, Mayotte and several Indian states, with over three million cases reported.

In 2006, around 38% of the population of the French island La Reunion was infected. Unusually, during this epidemic, few asymptomatic infections and a relatively high mortality rate were observed, most likely due to the lack of prior population immunity. Fears have grown for outbreaks of CHIKV and other arboviral diseases in America and Europe following identification of the Asian tiger mosquito (Aedes albopictus) as the major vector.

The first transmission within continental Europe was reported from north-eastern Italy in August 2007. Every year, imported cases among tourists are identified in several European countries. An outbreak of Chikungunya in the Caribbean region was reported from the French part of the island of Saint Martin on 6 December 2013. Since then, autochthonous transmission of chikungunya has been reported from several islands in the Caribbean and recently for the first time in South America (French Guiana). More recently, three cases of infection with Chikungunya virus have been detected in Catalonia in eight persons who had recently traveled to Caribbean countries where the disease is endemic.

The emergence of an arthropod borne virus disease depends (1) on the presence of the vector and (2) the introduction of the virus.

The Asian tiger mosquito (Aedes albopictus) is present in Catalonia since 2004, and eight cases of this disease in Catalonia have detected from 2010 to 2013, all in people who had traveled to countries where the disease is endemic. Therefore, the risk on and emergence and autochthonous transmission of Chikungunya in Catalonia is possible. A team of researchers of CReSA is involved in the program of surveillance and control of arthropod borne virus disease to detect the Chikungunya virus in adults mosquitoes coordinated by the Agència de Salut Pública de Catalunya. Moreover, CReSA is involved in a research project to better understand the potential role of the Asian tiger mosquito in Chikungunya virus transmission in Catalonia. This is a coordinated project with the Insituto de Salud Carlos III funded by Fondo de Investigación Sanitaria (FIS) del Ministerio. The main goal of this project is to identify how different environment conditions and host viremia influence vector competence (i.e. the ability of the mosquito to transmit the disease to humans).

All these experimetns are performed in CReSa’s Biosecurity level 3 facilities. The results obtained from these vector competence assays will be useful to assess risk of mosquito-borne disease and provide novel strategies to mitigate mosquito-borne arbovirus transmission in Europe.