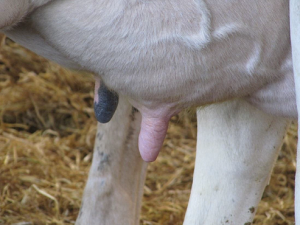 Matrix-assisted laser desorption/ionization time of flight (MALDI-TOF), a culture-dependent assay, is a rapid and reliable method that is able to identify a great variety of isolated bacteria. The MALDI-TOF works by using laser excitation of proteins to create a unique protein spectrum pattern of an unknown microorganism.

This technique is based on the acquisition of protein (conserved ribosomal proteins) fingerprints directly from intact microorganisms, as such profiles vary considerably among microorganisms. Results are compared with thousands of spectra in a reference database, from which a bacterial identification is provided. The assay provides a new diagnostic platform that overcomes the limitations of traditional diagnostics, being time-consuming and laborious, or the need of sugar fermentation or test kits. In recent years, research studies showed that MALDI-TOF is a powerful and reliable diagnostic tool for identification and discrimination of mastitis-causing pathogens, including non-aureus staphylococci (NAS) from bovine mastitis and spiked milk samples. Previous research studies have studied the performance of MALDI-TOF assay for identification of NAS from milk. However, the assay has never been investigated for NAS from nonmilk or environmental samples.

The objective of this study was to evaluate the typeability of the MALDI-TOF assay for the identification and differentiation of bovine-associated NAS species on aseptically collected quarter milk and teat skin samples in dairy herds.

For this study, 14 to 20 cows with elevated somatic cell count were randomly selected from 8 dairy herds, for teat skin swabs and foremilk samples from right hind and left front quarters. Teat skin swabs and milk samples were collected aseptically for preliminary identification using bacterial culture on chromogenic and calf blood agars. Colonies from milk and teat skin samples with suspicion of having NAS were identified to species-level by MALDITOF assay.

Out of 511 isolates from 284 quarters (142 cows), 78% (n = 399) were identified by MALDI-TOF. The percentage of correctly identified NAS from milk (91%, 105/115) using MALDI-TOF was higher than the percentage from teat skin (68%, 268/396). Out of the identified isolates, 93% (n = 373) were successfully identified as NAS, whereas the remaining 26 (7%) were shown to be other bacterial species. Out of 26 NAS isolates, 1 originated from milk (Corynebacterium stationis), whereas 25 originated from teat skin representing Aerococcus viridans (n = 7), Bacillus pumilus (n = 13), Enterococcus saccharolyticus (n = 1), Clostridium septicum (n = 1), Corynebacterium stationis (n = 2), and Corynebacterium casei (n = 1). The MALDI-TOF identified 85 (98/115) and 62% (245/396) of the isolates in the first test. Isolates that were not identified to species-level at first test were subjected to a second test, and 47 (8/17) and 32% (48/151) from milk and teat skin, respectively, were identified. After 2 rounds of MALDI-TOF, 22% (n = 112) of the isolates were not identified, representing 103 from teat skin and 9 from milk. Eighteen isolates without identification by MALDI-TOF were successfully identified to species level using sequencing, where 16 were correctly identified as NAS, whereas the other 2 were Corynebacterium stationis.

Our findings indicate that MALDI-TOF is a valuable tool for identification and typeability of NAS species from milk samples, but is less useful for identification of isolates from nonmilk samples. Furthermore, in both the first and second submissions, the performance of MALDI-TOF for identification of isolates originating from milk (85 and 47%) was higher than for those originating from teat skin (62 and 32%, respectively). One possible explanation is that these unidentified bacteria from teat skin come from a natural teat skin microbiota (commensal bacteria), which have not 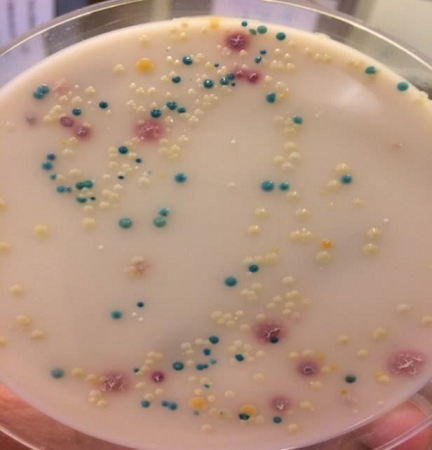 been previously included in the BDAL database. For that reason, they may be out of interest of the microbiological diagnosticians, and therefore were not considered in the database of MALDI-TOF. Moreover, our findings showed that the vast majority of the unidentifiable NAS isolates originated from teat skin. A reasonable explanation could be that those isolates are new NAS species. Another reason is that these isolates could be known NAS species but are not included in our BDAL database (Bruker Daltonics) database. We noticed that NAS isolates originating from teat skin might require extra rounds for identification by MALDI-TOF compared with those originating from milk. That phenomenon is supported by the markedly high number of isolates from teat skin remaining un unidentifiable after the first and second rounds of identification. A possible explanation could be that bacterial isolates from the environment may have developed an extra layer or capsule of protein material as a mean of protection against unfavorable environmental conditions.