Next year’s edition of the European Symposium of Porcine Health Management will be held in the city of Barcelona on May 9-11 2018.  The organising committee is entirely composed of IRTA-CReSA and UAB Veterinary Faculty researchers.

The first ESPHM was organized by the European College of Porcine Health Management (ECPHM) in 2009 in Copenhagen (Denmark). Subsequent meetings were organized in Hannover (Germany) in 2010 and Helsinki (Finland) in 2011. After the creation of the European Association of Porcine Health Management (EAPHM) in 2010, the following symposia were organized in a three-party fashion, involving the EAPHM, the ECPHM and the local organizers. By means of this organizational formula, the ESPHM has been held so far in Bruges (Belgium), Edinburgh (United Kingdom), Sorrento (Italy), Nantes (France), Dublin (Ireland) and Prague (Czech Republic) from 2012 to 2017. Therefore, the symposium is being consolidated, and the 10th edition will be held in 2018 in Barcelona (Catalonia). Moreover, consolidation is not just a matter of a yearly organization but also on an increasing number of delegates, reaching the maximum number of around 1600 attendants last year. 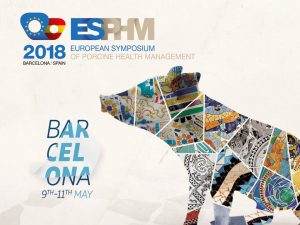 ESPHM is the expression of a long-standing need at a European level. The lack of a continental swine veterinarian congress like in North-America (American Association of Swine Veterinarians Annual Meeting) and Asia (Asian Pig Veterinary Society), prompted first the ECPHM and then the EAPHM to organize a yearly meeting devoted to all subjects of porcine health management. The symposium philosophy consist of mounting a sound program, with cutting-edge scientific-technical knowledge, practically oriented, which is able to catch the attention of swine veterinarians all over Europe, but with full international vocation. The symposium’s content includes invited lectures, initiating always with the state-of-the-art swine production in the organizing country, as well as oral communications and posters.

None of the above has been and will be feasible without the contribution of speakers, delegates and chairpersons as well as the funding of partners and supporters. Our deep thanks to all of them; they will be the core of the ESPHM 2018! Moreover, our deep appreciation to the board members of the ECPHM and EAPHM, since they represent the soul and the spirit of the ESPHM.

Catalonia is a magnificent and beautiful country and tourist/vacation possibilities are almost endless. Barcelona is a cosmopolitan city in which you will feel at home. You can choose from culture to environment and nature, from sea to mountains, from exhibitions to partying… you will surely meet up with your match. Discover, taste, experience and enjoy!