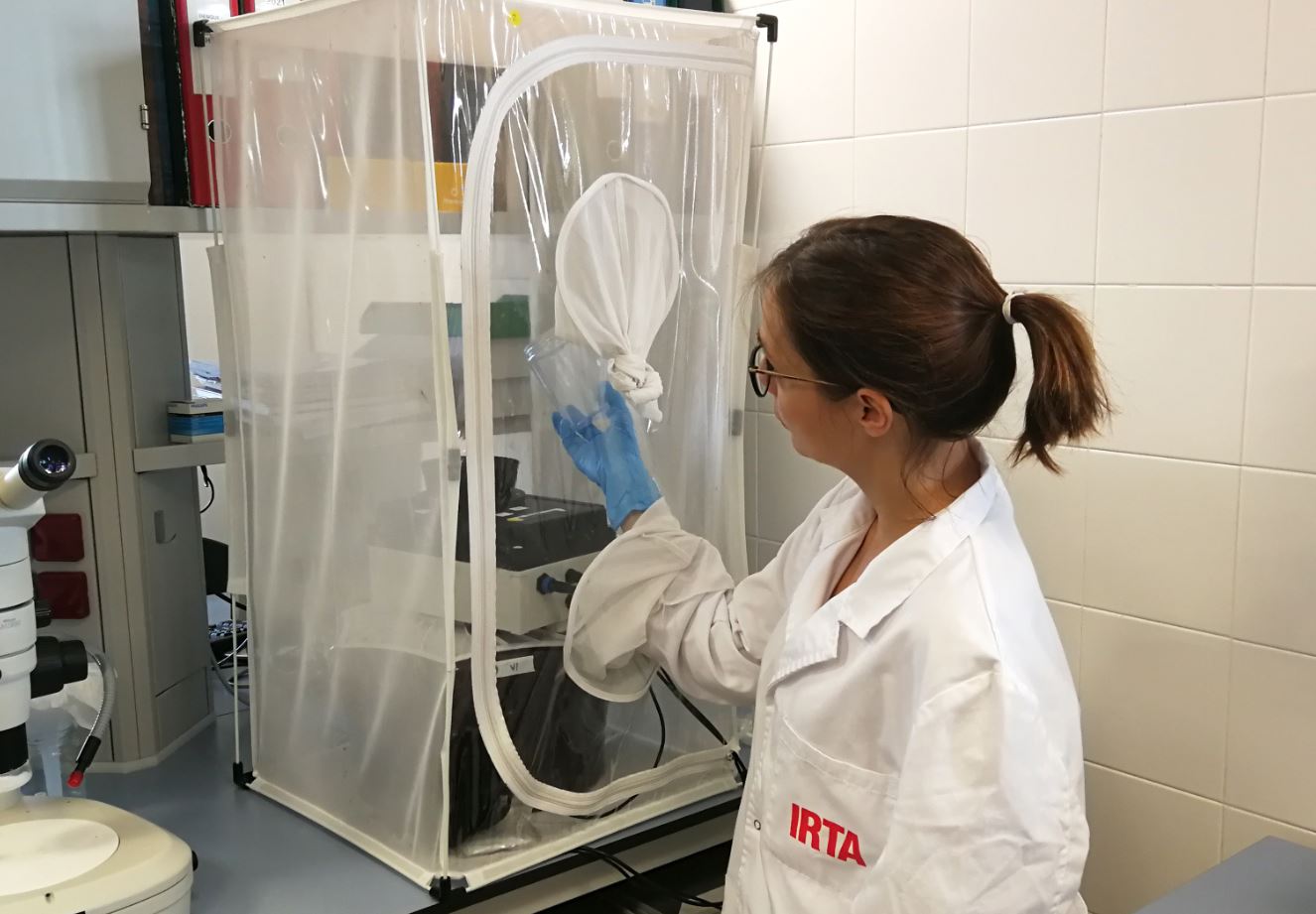 The European project VECTRACK will design an intelligent trap based on the machine learning and satellite-based method to capture and differentiate mosquitoes by species, sex and age.

The project is led by the company IRIDEON, in coordination with IRTA, the Belgian company Avia-GIS-Software and the National Institute of Saude Dr. Ricardo Jorge of Portugal, with the participation of the Public Health Agency of Barcelona (ASPB) and the Mosquito Control Service of the Baix Llobregat County Council. The objective is to obtain integrated and real-time quality information on mosquitoes disease vectors to improve surveillance and control strategies and reduce the risk of their transmission.

To prevent the emergence of outbreaks of mosquito-borne diseases, it is essential to have early detection systems to act promptly and develop preventative strategies. In Catalonia, since 2014 there is the Protocol for the Monitoring and Control of Arbovirosis transmitted by mosquitoes that establishes the coordination between the various professionals of the health care network and the specialists in epidemiology and entomology. When an imported or native arbovirus case is detected, specific surveillance is carried out during the patient’s period of life to reduce the tiger mosquito populations of their environment and thus prevent possible transmission, as has happened this week with the declaration of an autoctonous case of dengue in the Barcelonès. However, these inspection and sampling tasks require a lot of time to obtain quality information.

With the VECTRACK European project this autumn, the first automated transnational vector surveillance system will be launched that will combine traditional sampling systems with remote sensing systems and modeling techniques to develop risk maps. It is about to prepare traps that capture adult mosquitoes, similar to those already used, but with automatic sensors installed that will give them the ability to intelligence. Each trap can automatically capture very complete and high quality information on captured mosquitoes, such as the count of specimens, the species, sex and age. On the other hand, they will also collect the GPS position of traps, and information on temperature and humidity.

“Training” phase of the sensors

The first phase of the project will start in november 2019 in the laboratories of the Animal Health (IRTA-CReSA), where experiments will be carried out to calibrate and configure the trap sensors using the automatic learning method of machine learning machines. “The sensors, developed by IRIDEON, will identify the species, sex and age of mosquitoes according to the frequency of flight and the shape of their body, as they are different characteristics in each species,” explains Dr. Sandra Talavera, researcher at IRTA-CReSA. The peculiarity of this new trap model is that the sensor will know to rule out the interferences in the flight of mosquitoes that occur when trap sucks mosquitoes inland. “Traps emit carbon dioxide as an entree and then suck the specimens inwards so that they do not escape,” explains Dr. Carles Aranda, researcher of the Mosquito Control Service of the Baix Llobregat and assigned to the IRTA-CReSA. In a previous experiment, the sensor was already able to differentiate the species, sex and age of the mosquitoes in a range of efficiency from 61 to 99%.

The mosquito species that will identify the trap are the potentially vectors of different arbovirosis, among them the tiger mosquito (Aedes albopictus), the yellow fever mosquito (Aedes aegypti) and the common mosquito (Culex pipiens). But scientists are also interested in the sensors to distinguish and quickly discard other mosquitoes that do not transmit diseases but which are also very abundant in the environment and also have some similarity to those that are the vector of diseases, such as Culiseta longiareolata. 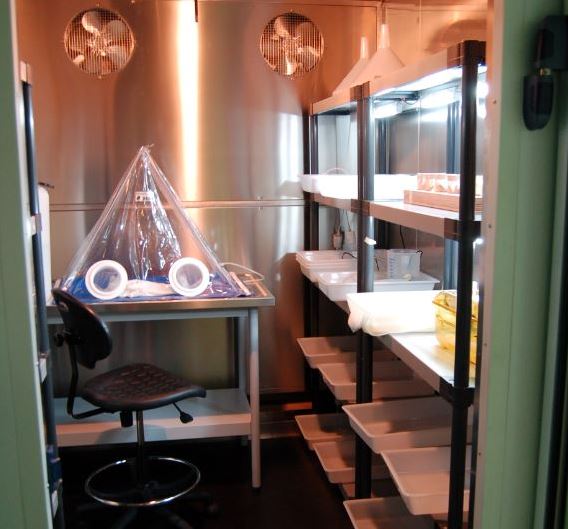 Experimental box of Entomology at the Biocontainment Unity to work with exotic species of mosquito such as Aedes aegypti.

In the case of the yellow fever mosquito (Aedes aegypti) experiments must be carried out in exceptional conditions. This mosquito, mainly vector of dengue, yellow fever, Zika and chikungunya, is widely distributed by Southeast Asia and South America. In Europe, it is currently present in Madeira Island and in the east of the Black Sea, and it has been detected in other places, like the island of Fuerteventura, in December 2017, where it was quickly eradicated. For some years now, the main concern is that it reaches the Iberian Peninsula as it was done by the tiger mosquito. For this reason, it is necessary to have the systems ready to detect, as rapidly as possible, the arrival of this species in other countries. As it is an exotic species in Catalonia, experiments with Aedes aegypti will be carried out at the IRTA-CReSA Biocontenition Unit, which has Biosafety level 3 laboratories, members of the ICTS Network of High Biosafety Level Laboratories (RLASB) under very strict conditions to prevent any species from escaping.

First pilot field test will be held during Spring of 2020

In Catalonia, the first test phases with traps will be carried out in the city of Barcelona by the Public Health Agency of Barcelona (ASPB), which is responsible for monitoring and controlling mosquitoes in the city. “These sensors will be used to obtain information quickly and truthfully and thus reduce the reaction time in the control interventions. This is especially relevant for the monitoring of cases of arbovirosis where it is interesting to act immediately to reduce the risks of a possible transmission, explains Tomás Montalvo, a researcher at the CIBER of Epidemiology and Public Health and responsible for the Monitoring and Control Program of mosquitoes of Barcelona. The ASPB, together with IRIDEON SL, was already pioneering in the development of a first phase of these sensors that allowed to identify the mosquitoes of the rest of the insects, and that provided valuable information for the management of vectors in urban environments. At the same time, more tests will be carried out in the field with traps in periurban and rural settings by the Mosquito Control Service of the Baix Llobregat County Council and also in other peri-urban areas of Portugal. 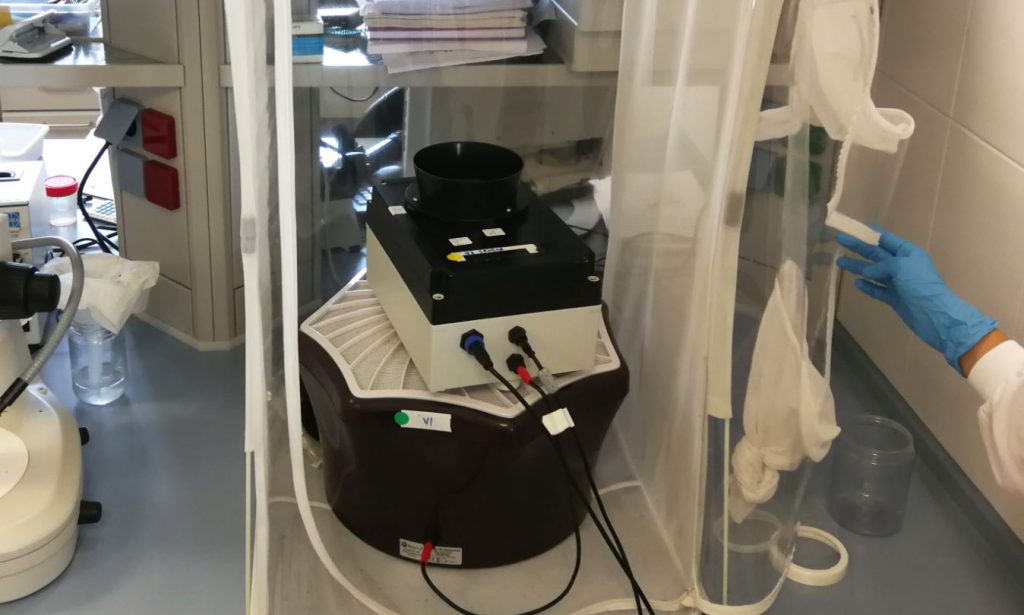 The ultimate goal of VECTRACK is to facilitate the collection of field data to obtain species composition data, evaluate their density, build risk maps and predictive models of the species of mosquito vectors of diseases that most worry in Europe and be able to plan and improve surveillance and control programs. The integration of all the data collected by the sensors will be borne by the company AVIA-GIS through the tool VECMAP. It is the main European company specialized in the collection, processing and analysis of spatial information and the development of space-time information systems in diseases transmitted by vectors and emerging zoonoses.

In a context of globalization, it is necessary to control the vectors and their distribution to act quickly when there is a case of mosquito-borne disease. During 2018, there was a high incidence of West Nile virus in Europe with 2,083 autochthonous cases that accounted for more than the total number of autochthonous cases occurring in the last 7 years. This virus has a zoonotic cycle, and it is transmitted through the bite of mosquitoes infected generally of the Culex pipiens species among birds, but people and other animals such as horses can also be infected. “In people it can cause a neurological disease that can get to be mortal. Currently, no specific therapy or vaccine is available. In Catalonia, in November 2017 the virus was detected in birds of prey and in 2018, the first case in horses,” explains Dr. Núria Busquets, researcher at IRTA-CReSA. On the other hand, the Rift Valley fever virus is an endemic disease of the African continent in the spotlight in case it reaches Asia or Europe. It mainly affects sheep, cows and other wild ruminants but also by infecting people through the mosquito bite of Aedes and Culex genera.

In Europe, the transmission alert for Zika, dengue and chikungunya is activated because the vector potential of these diseases, the tiger mosquito, is widely distributed in many countries, especially on the Mediterranean coast. In Catalonia, since the Protocol for the Surveillance and Control of mosquito-borne arboviruses in 2014 was launched, a total of 507 cases of dengue were detected, two of which are autochthonous. The first was in November 2018 and the second is the current case, reported this week. In total, in Spain, there are 7 cases of autochthonous dengue reported so far. As regards the cases reported so far by Zika and Chikungunya, cases have been imported, that is, people infected with the virus in another country.