Bovine tuberculosis: Challenges and controversies (I). A shared disease 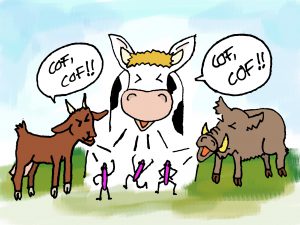 Over the last 100 years developed countries have carried out numerous and expensive actions for the control of tuberculosis in people and livestock with variable results depending on the case. Particularly, in Spain, the bovine tuberculosis eradication campaign began a long time ago (since 1987 in the present form). After a few years of success, achieving a significant decrease, the prevalence of bovine tuberculosis has remained stagnant since the beginning of the 21st century.

This scenario, among other causes, is due to the role of the wild and domestic reservoirs of the disease. In a post previsouly published in this blog, the role of goats as a source of tuberculosis cases in cattle was discussed. In 2017, the research group on animal tuberculosis of IRTA-CReSA has published two articles that study the transmission of the disease between cattle and wild boars, as well as between goats and sheep. 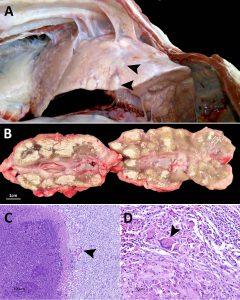 TB lesions in a sheep.

The first study was conducted in a wild boar population of the Natural Reserve of Ports of Tortosa-Besseit, where several cases of tuberculosis in cattle were also detected. The study showed a high degree of agreement between wild boars positive to the serological test and the presence of tuberculous lesions, thus, enabling the long-term serological follow-up of the disease in the wild boar population, and how it evolved after the interventions that were carried out in cattle.

The second study showed, for the first time, the transmission of tuberculosis between goats and sheep of a mixed herd. In contrast to the widespread opinion in the sector, the study reinforces the idea that sheep are susceptible to the disease if they are in contact with other infected animals and can play a role in the epidemiology of animal tuberculosis.

These studies indicate that tuberculosis needs to be addressed as a multi-host disease, i.e. as a shared disease, which should be controlled in all susceptible species to attain a feasible eradication scenario. The competent authorities and the sector will have to put on the table the tools and the will to make it possible.