From the microbes of chickens to our plate 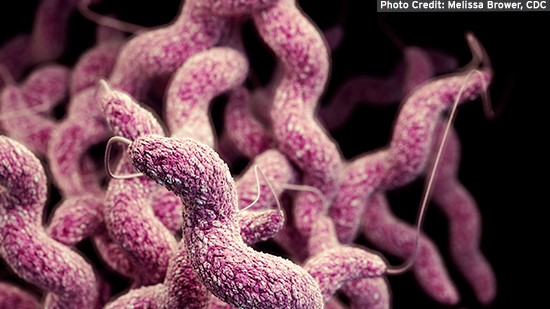 Campylobacter is one of the main responsible bacteria for foodborne diarrheal diseases. Most of the cases of diarrhea are associated with the consumption of food, mainly poultry meat contaminated with Campylobacter, hence, this bacterium represents a problem for food security of first order. Unlike Salmonella, Campylobacter is not part of the popular vocabulary, nor does it appear regularly in the media, although it is one of the pathogens responsible for the largest number of cases of diarrhea in humans in the European Union.

But, how does the Campylobacter infection occur in humans?

Bacteria easily contaminate food, human infection occurs through ingestion of food contaminated by Campylobacter, especially raw or undercooked chicken meat, non-pasteurized milk, environmental water, foreign travel, cross-contamination during handling and preparation of food at home; in addition, other potential risk factors for humans, such as age (more cases in children under 5 years), seasonality (more positive cases in warm months) and the immunological state of the host have been detected.

How to act in order to control campylobacteriosis?

Given the importance of Campylobacter in public health, it is necessary to control all links of the food chain, particularly in primary production, due to the high prevalence in birds. This is why it is important to know in depth the behavior and epidemiology of this pathogen and, in this manner, find strategies to apply firstly in the primary production, to lower the prevalence and therefore decrease the bacterial load in the chickens at the age of slaughter, then to follow up and control in the different links of the production chain (Slaughterhouses, distributors, retailers and final consumers).

On the other hand, the implementation of effective biosecurity measures for the control of Campylobacter on farm would not only reduce the high prevalence of positive batches at slaughter age but also indirectly improve the overall health status of the farm. This would lead to less need for the therapeutic use of antibiotics and probably a reduction of resistant strains. At the moment, there is not a single intervention or technique that has been shown to effectively prevent the presence of Campylobacter in food just by itself. Proper control of this pathogen requires the combination of control strategies at different points in the food chain. 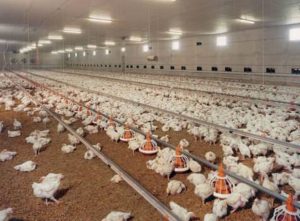 A PhD thesis was conducted in IRTA-CReSA laboratories in which it was proposed to deepen the knowledge about Campylobacter in meat poultry both from the aspect of genetic diversity, as well as the circulation of strains resistant to antimicrobials in the farm or the potential virulence of them. All this with the ultimate aim of contributing to establish or improve mechanisms of control of the pathogen in farm, and thus, to minimize the risk of infection in humans.

Juan Guillermo Cantero Portillo has been awarded a scholarship by the Postgraduate Scholarship Program of Itaipu (Paraguay). This thesis has been partially funded by the CamCon project (Campylobacter control – novel approaches in primary poultry production) of the Seventh EU Framework Program, FP7 / 2007-2013, ref. 244547.

The thesis was presented in the Classroom of the Faculty of Veterinary Medicine on July 25, 2017.