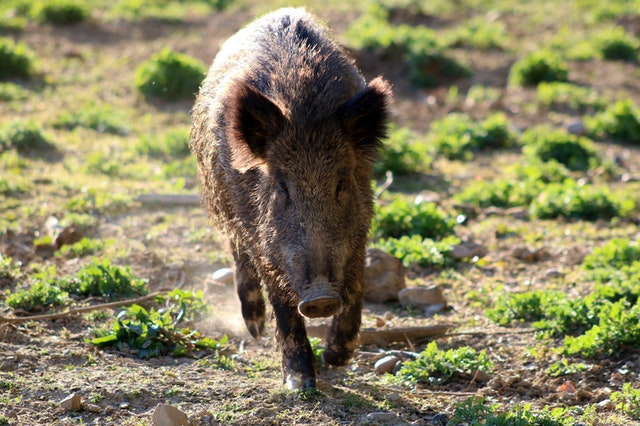 2022 has begun with a good scare for the world of pigs: On January 7, 2022, the official veterinary services of Italy warned of the presence of African Swine Fever Virus (ASFV), genotype II, in samples collected from a wild boar carcass found in the municipality of Ovada (Piedmont), in the northwest of the country. So, the African Swine Fever (ASF) has appeared, as suddenly and unexpectedly, in Italy. Well, in fact, in mainland Italy, since on the island of Sardinia, the ASF has been there for years, but let’s get down to business first, what is the ASF and why is it so important?

ASF is a deadly hemorrhagic disease caused by ASFV that affects pigs, both domestic and wild (wild boar) and is on the list of notifiable diseases in the OIE (World Organization for Animal Health). For the human species, the action of humans (transport of infectious animals, meat products …) has a lot to do with the spread of the disease. There is currently no effective treatment or vaccine, and its control is reduced to strengthening as much as possible the existing biosecurity measures on farms and to a rapid diagnosis combined with the emptying of the facilities affected by the disease. For this strategy to be effective, this emptying must be accompanied by fair financial compensation for the farmer. In the absence of fair financial support, disease claims will be scarce and the ASF will end up out of control: This has happened (and will happen) wherever this strategy has not been properly implemented. The emergence of ASF in a country has devastating consequences, as exports of pork and its products from the affected area are banned. Leaving aside the direct economic consequences of the economic losses caused by the disease or those arising from the course of its eradication, we can easily imagine the disaster that would involve the appearance of a case of ASF in the plain of Vic or Lleida for the economy of Catalonia.

The ASFV originates in Africa, where its natural reservoirs (warthogs and other African wild pigs, as well as ticks of the genus Ornithodoros) live, which become asymptomatically infected. It was during the years 1957 and 1960 that the ASF made its first leap out of the African continent, entering from Portugal (through domestic pigs fed with food scraps – infected with ASFV- from a plane) and spreading it spread throughout most of Western Europe, and, albeit fleetingly, through America. Gradually, the disease was brought under control, until in 1995, the Iberian Peninsula was declared free of ASF. The disease then disappeared from Europe, except for the island of Sardinia (Italy), where ASFV (strains belonging to genotype I) has been endemic since 1978. A few years later, in 2007, ASFV strains belonging to genotype II) returned from Africa to appear in the Republic of Georgia (this time, they were domestic pigs fed with food scraps from a ship) from where it has spread, slowly but inexorable to Europe and Asia (notably the case of China, the world’s largest producer of pork) and even spotlights have been detected on the islands of Oceania and the Caribbean. Depending on the country, the situation is more prevalent for domestic pigs (notably in the Asian scenario) or for wild boars (the majority in Western Europe). Since the ASF was detected in the European Union in 2014, the disease has spread to 16 countries, of which only two have been able to be officially declared disease-free again: the Czech Republic (ASF eradicated in 2018) and Belgium (ASF eradicated in 2020).

The focus that was declared in Belgium in September 2018 bears some resemblance to what was reported last week in Italy. In both cases, the ASFV made a spectacular leap, covering hundreds of miles across borders – an impossible task for an infected boar. Therefore, it is necessary to look for a source other than the natural movement of wild animals. Remains of ASFV-contaminated meat products left within reach of a wild boar in a rest area of ​​a highway (a piece of a sausage sandwich from Eastern Europe, for example) is not a far-fetched possibility or, worse, unlikely. We must also pay attention to the huge number of animals that cross our border: this is the other great possibility for the ASF to enter Catalonia. With the price of pork rising, the large number of piglets that we currently import to fatten them and then export their carcass to countries now in deficit such as China. Nor do we underestimate the number of fattened animals that are imported and go straight to the slaughterhouse: we think that once you cross the border, if the animal is detected in our country, the positive would be ours. Be careful where you buy all these imported animals. Be very careful. Greed to get a good bargain can ruin the whole industry. 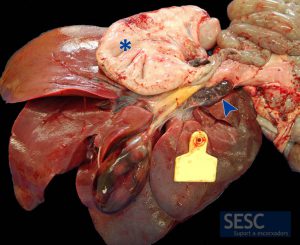 Hemorrhage of the gastrohepatic lymph node (arrow), this one is a very ASF characteristic lesion. The gallbladder shows areas of hemorrhage in the wall. In the gastrointestinal tract serosa petechiae can be obserevd, such as the stomach of the image (asterisk). Image by SESC.

According to the Italian authorities, in the area where the infected carcass of the wild boar has been found, there are only a small number of industrial pig farms and a few small home farms (the so-called backyard farms), this is not a high-density pig area. However, the density of wild boars is considered very high, and this is a detail to keep in mind when assessing the risk of expanding the focus. The Italian authorities have immediately adopted the recommended ASF control measures and have convened a group of experts to decide on the measures to be implemented to limit the spread of the disease. Thus, in an area around where the infected carcass was found, the active search for wild boar carcasses has started and their subsequent removal and analysis, the hunt has been controlled in the area, visits will be made. inspection of nearby pig farms … and, of course, both in the area directly affected and in the rest of Italy, biosecurity will be intensified on farms, animal surveillance and work will be done. to increase the alert level. Unfortunately, at the time of writing, there are two more cases yet to be confirmed. These are two wild boar carcasses found about 20km from the original focus. If these new cases were confirmed, it would be very worrying because, on the one hand, this fact would indicate that the ASFV has probably been circulating in the area for some time and, on the other hand, since the detection of the disease has not been as early as we would have liked, the chances of controlling the outbreak with the effectiveness shown by the Czechs and Belgians, decrease considerably.

In the meantime, what can we do at home? We will not tire of insisting: we must remember the extreme importance of biosecurity in pig farms, whatever their size. Care must be taken with hunting, especially if hunting abroad, even in ASF-free countries (not to mention the extreme precautions that must be taken if we visit directly affected or neighbouring countries!). Existing passive surveillance systems should also be strengthened on the farm, as a slaughterhouse or in the wild: all animals potentially suspected of ASF should be verified. Speed ​​in acting is key to successfully controlling the disease.

Thus, the sudden appearance of this focus in northern Italy, so far, the closest to our country since the reappearance of the ASF in Europe in 2007, should increase (even more) the tension on the sector. pig: we must be aware that the sword of Damocles hangs, now more than ever, over our heads. If all goes well and this focus is successfully resolved (cross our fingers) as the Belgian focus was resolved two years ago, we will be able to breathe a sigh of relief, but we will not be able to believe that the ASF problem has been solved: the next border crossing could appear in our country. We are warned, not once, but twice. Let’s make an effort.

Here you can see entries on the SESC blog with images of typical ASF lesions in pig carcasses.

You can also consult the website of the Department of Climate Action, Agriculture and Rural Agenda of the Generalitat de Catalunya with measures to combat ASF: